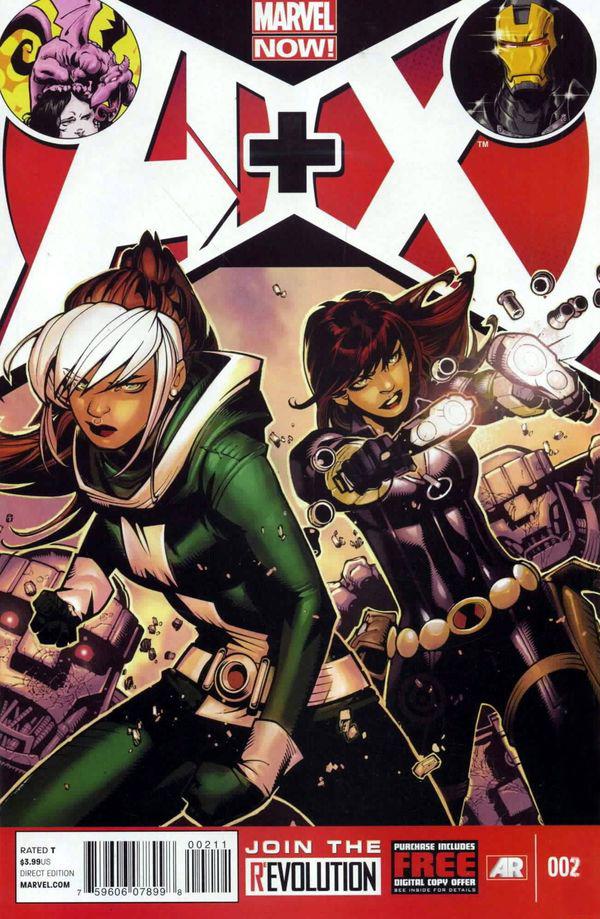 The first issue of A+X was arguably a mixed bag in terms of quality. The Captain America and Cable story was a well thought out, funny and entertaining story that didn’t require a lot of previous know-how to enjoy. The Wolverine and Hulk story, however, fell short of expectations and seemed rushed and poorly paced. It also seemed to end on a cliffhanger that didn’t seem like it needed to be there. So while the overall product was decent (saved by the Cap & Cable story) I was hesitant to read the second issue if this trend of “one good, one bad” story was going to continue. Luckily my fears have seemed to been proven incorrect as A+X issue #2 is exactly what this series should be from start to finish.

The first story focuses on Black Widow trying to enjoy her day off by getting a mani-pedi. Problem is, as an Avenger/secret agent, days off never end up like they should. Before she gets a chance to relax and enjoy her day, a sentinel drops on her custom (and very expensive) car and the spa is blown to kingdom come. She attempts to stop them but breaks her hand hitting one of them, leaving her at a disadvantage. Before any further harm can come of her though, Rogue shows up (with Captain Marvel’s powers in tow) and the two of them decide to save the day.

The second story follows Kitty Pryde trying to be recruited by Resilient Resources (a Tony Stark/Pepper Potts company) for a job opportunity. Considering her headmaster duties at Jean Grey she initially declines but Tony himself decides to come in and woo her away from the school. Before any progress can be made though, an incident involving Pym Particles and an old foe from Wolverine and the X-Men (fans of the series will  be glad to see this) causes both of them to spring to action with exciting results.

Both stories feel like they belong in a book like this. They’re funny, backed to the brim with action and don’t feel like they need any further follow-up. The one-and-done aspect is something that works and hopefully the rest of the series can continue this trend. Bachalo’s Black Widow/Rogue story is especially hilarious, although there are times where Black Widow can come of vain which rubbed me the wrong way a little. There was also a whole lot of exposition thrown in after the fact, which bogs down an otherwise entertaining ending, but the overall story is still enjoyable. The second story is incredibly hilarious as well, especially the last two panels (which I won’t spoil for anyone), and makes up for any faults the first story might have had. The Kitty/Tony relationship is an interesting one and I’m glad to see they’re reminding people Kitty is smarter than people might think.

The art is a major selling point for both comics though and I’d suggest picking it up on that alone. Bachalo handles the art as well as the story, and his art is beautiful. You can really see a great connection in the way it’s written and drawn and it really brings the comic to life. Some action scenes get a bit muddled and it’s hard to tell what’s going on, but I really want to see more of Bachalo’s art in the future, maybe even down the road with this series again. Mike Del Mundo handles the other story and it is a stark change from the first story. Characters are elongated and have more dramatic motions and the almost pencil feel of it is refreshing in an almost otherwise ink-heavy comic world. The art lends itself well to the action, as well as the quieter scenes and the way reds and pinks are used is definitely something worth noting.

A+X #2 is exactly what this comic should be. Fun, funny and entertaining, if you’re looking for a simple comic that anyone can pick up without needing all of the background information, this is the comic for you. After the first issue I was hesitant, but now I see A+X as a series I can look forward to every month. Hopefully the third issue can be just as entertaining as this one. A definite buy for anyone interested.