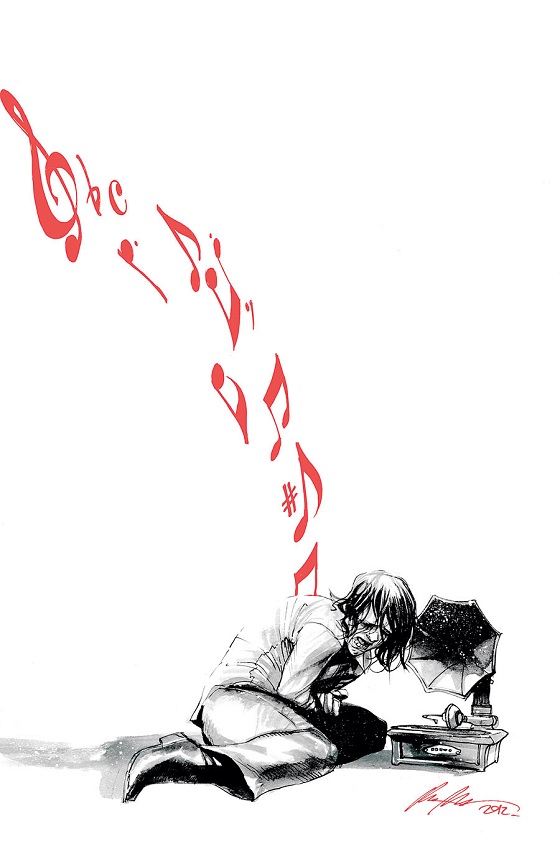 There have been many books over my time as a comic enthusiast that has stirred a deep emotional response in me. I Kill Giants was (until today) the most recent example, as the extremely powerful story touched me with its message. While only one book has ever made me cry, WE3 by Grant Morrison (I have a huge soft spot for animals), it seems as though that has been Scott Snyder’s goal with The Blacklist: to make this diehard American Vampire fan weep like a baby.

Alas, you did not succeed, Scott… but you came pretty damn close. And I loved every minute of it.

American Vampire has been a love story through and through. Henry and Pearl have held our hand as we walked with them through the horrific, vampire infested streets of classic Americana. When “the pictures” began to change the world, Henry was just a man trying to convince a girl to love him. When war engulfed the entire world, our couple was doing everything they could to make sure they were reunited again. And finally, here, in the face of death, the Preston’s fight not for themselves, but so they may hold each other after the fallout of this unfortunate turn of events.

Issue #33 is masterful. The action never once outpaces the emotion that has driven this arc, but is rampant enough to have you guessing through the entire book. Snyder has said that this issue will change the landscape of the entire series moving forward, and that death will accompany it. With all of our main characters in seemingly perilous situations throughout the book, you are constantly asking yourself if this is the last panel you will see them in.

Snyder’s writing is as good as I have read from him, which is high praise, but Albuquerque continues to match the quality of writing with his art. The art team on American Vampire has done their best work of the series on the Blacklist, and it culminates in a truly stunning finale. Albuquerque has thrived in bringing emotion to the monsters the series is predicated on; showing glimpses of just how vulnerable the immortal can be. He and colorist Dave McCaig have been paired together in all of the series’ main story arcs, and as the series has gone on, they have created an incredibly distinct, vibrant look to the book. It bleeds reddish hues when things start to heat up, or takes all light away from a silhouette when things could not be any more grim. Both men deserve major credit for bringing the book to the success it has had, and I can only hope that they continue to grow as American Vampire continues.

This is creator-owned work at its finest. No regard for keeping the status quo workable for someone else, no pulling punches, and a story that drips with the enthusiasm and hard work put into it by all parties involved. The Blacklist is the best chapter to, what I consider to be, the best book in all of comics. American Vampire will see some drastic changes in the coming issues, but they will come later. The AV crew couldn’t have picked a better time to take a break, and they deserve it!