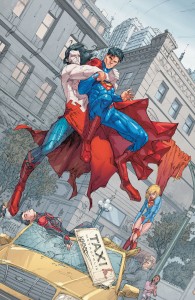 An oft-voiced opinion of many over the past year is that Superman’s self-titled series has struggled to find its voice since the relaunch in 2011, and I can certainly be counted among them.  Between Clark’s amorphous personality, behind-the-scenes issues at launch, and an uninspiring ‘Alien of the Month’ format; it is now with pleasure and surprise that I state the book appears to be rounding a corner at present and beginning to find its stride.

The third creative team to take the helm starting with the #0-issue, Lobdell and Rocafort have since kicked off their “H’el on Earth” Superfamily mini-crossover; utilizing it to guide the narrative into a direction of relevance and forward momentum, while building a status quo that feels modern and intriguing.  A mythos takes shape!  Personalities are defined!  Relationships develop!  Things are happening!  While these may seem like barebones basics, they are items that have regrettably been in short supply until recently.

Cutting its way through the various titles and locations of the Superman Family of books, the “H’el on Earth” storyline has taken place throughout the Supersphere of influence so far; even including pre-destroyed Krypton, where a present-day Superman has somehow found his way there to witness the trials of his parents and culture.  In the current day, a figure named H’el has arrived on Earth and claims to be a fellow Kryptonian and student of Clark’s father, Jor-El.  Explaining his presence in Supergirl #14, H’el informs Kara how her uncle tasked him to wander the stars and safeguard the knowledge of Krypton before it was destroyed.  Inconceivably powerful in comparison to the Superfamily, this new Kryptonian is elated to find others of his heritage after his decades of solitary travel, and proposes a plan to Kal and Kara for all of them to travel back and stop the destruction of their homeworld.

Issue #14 picks up directly from last week’s Supergirl, where Kara (in her full Kryptonian garb) interrupts a tense and candid conversation between Clark and Lois.  The dialogue is snappy and light, but still able to convey the strained relationship between all of the characters involved.  Clark/Superman has taken on a slightly more impulsive and brash persona under Lobdell’s pen, clearly influenced by the positive reception of the young, fiery, Alabama-mud-stompin’ Superman from Morrison’s Action Comics #1.  Though this older version is tempered with humor and experience since those early days, he is still quick to honestly speak his mind, even if it brings nothing but trouble to his personal life.

Also important to note, the story acts as a vehicle to finally start delving into the relationships between the 2.5 Kryptonians that make up the titles of Super-man/girl/boy; naturally bringing the characters together through the story and forcing them to start dealing with each others existence.

Rocafort’s artwork is a delight to look at, and I am excited to see it in play here after experiencing the sci-fi ambiance he built in the deep-space adventures of Red Hood and the Outlaws.  The design is large in scale and scope, and Rocafort takes a couple risks in panel layout that payoff quite nicely in pacing the action scenes.  Meanwhile, the scratchy style of his pencils helps to enhance the mood of this younger and rough-around-the-edges Superman in comparison to his pre-boot counterpart.

I’m surprised to say it, but give it a spin.  Though the title’s past efforts have made people gunshy to give it a try, there is a downright fun and enjoyable ride to be had on this book since it has taken its new direction.  You just have to be willing to take the gamble and give it a second (third?) chance.