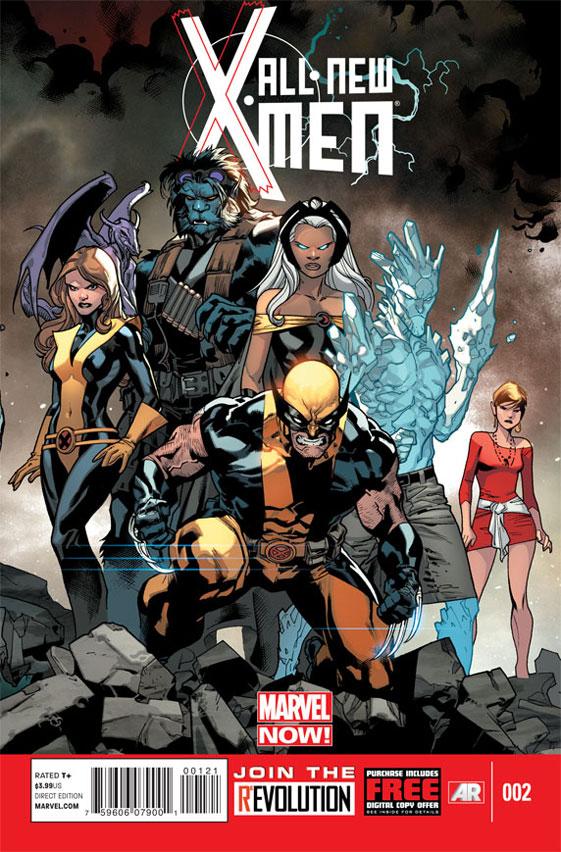 The All-New Status Quo for Marvel’s merry mutants continues with All-New X-Men #2! Now-Beast tries to bring Then-X-Men to Now-Now in order to prevent what he perceives as the Mutant Apocalypse! And… and… They do come to the present. And then… Well, that’s really the entirety of this issue. But dread not, noble reader! Bendis is a master of decompression (he managed to stretch Spidey’s 11-page origin story from Amazing Fantasy #15 into seven issues of Ultimate Spider-Man), and he appears to be employing that same slow-burn storytelling strategy with ANXM. This issue focuses first almost exclusively on the conversation between Henry McCoy and the young X-Men from the past before moving all of those players back to the present for a thrilling final half.

Despite the narrow focus of the issue, Bendis imbues the conversation and the immediate aftermath of the time-jump with tension, humor, and pathos. The desperation in Beast’s voice toes the line between manic and logic, and the reader is left wondering just how stable the good doctor is by issue’s end. I’m glad to see the other characters in the book question Beast’s wisdom in bringing the young X-Men to the present, in turn questioning just why Beast is so adamant in his disdain for Scott Summers. Wolverine’s rage is understandable—it does go back a ways and there is a tinge of knowing hypocrisy that informs the Cyke-Wolvie rivalry now—but Beast’s anger has vacillated between jealousy, disappointment, and pretense. Finally, it seems that Bendis is putting Beast’s reason to task as he finally takes it one step to far.

Bendis writes the Young X-Men perfectly; He lines the issue with subtle hints at Young Hank’s braininess, Young Bobby’s wit, Young Warren’s insecurity, Young Scott’s boy-scout nature, and Young Jean’s burgeoning awe with her powers, and the cliff-hanger ending suggests that these Young X-Men are not just going to be a plot device, but rather another moving, unstable player in a larger mythos of revolution, rebirth, and reimagining.

[Can you believe that that was one sentence? I feel like I just pulled a Bendis.]

Stuart Immonen, Wade Von Grawbadger (for real), and Marte Gracia are on fire with this series. Just two issues in and it’s quickly apparent that Bendis and the art team are in perfect synch. Immonen successfully juggles the intimate conversations with the double-page spreads in Bendis’ script. His style allows for both emotive faces and figure designs as well as kinetic action, and though the latter is few and far between in this particular issue, when Bendis does call for a certain hirsute headmaster to launch into clawed action, Immonen captures it perfectly. Bendis has a tendency to fill his scripts to the brim, and VC’s Cory Petit expertly fits each and every word into the bubbles in such a way that doesn’t intrude on Immonen’s panels.

Buy it. Despite my misgivings about how we got here (re: Avengers Vs. X-Men), Bendis has sated my fears that the whole “Bringing the Original X-Men Into the Present” would just be a stunt. Instead, we’re getting a thrilling new status quo with a fascinating array of players. Bendis and Co. have certainly kicked off a promising new X-book, so check it!