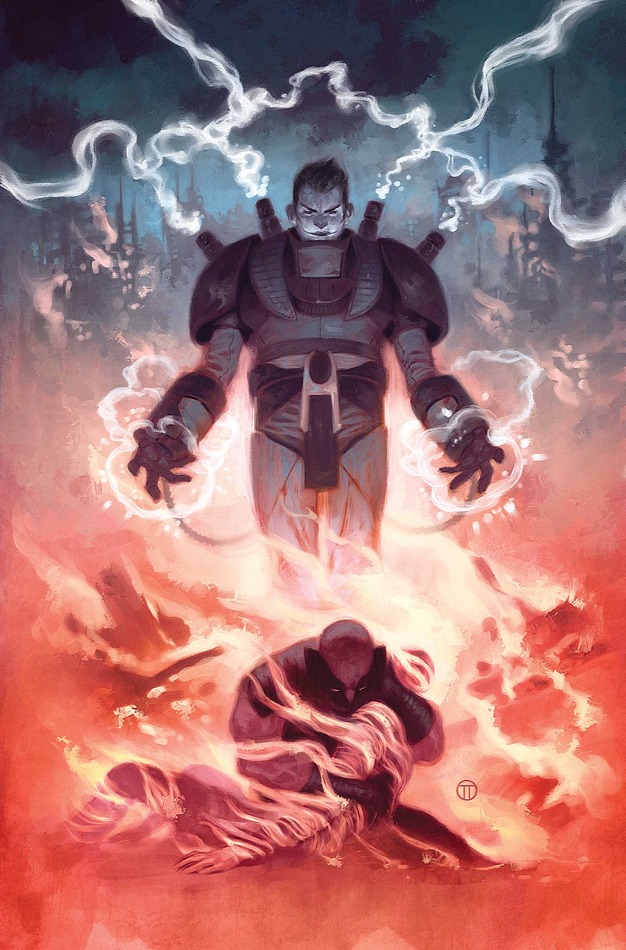 You learn a lot from comic books that have remarkable writing. Despite fictional characters, impossible settings, and stakes far higher than real life, there is a certain amount of satisfaction knowing that, no matter where you look, you find the perseverance and ingenuity of humans.

Evan exemplifies exactly what it means to be human in this issue of Uncanny X-Force. Faced with the death of everyone he’s grown to love and respect, he takes his own sanity into his hands and dons the Apocalypse gear. Where Daken expects to see a broken and angry boy is a young man who has found the power to protect those he loves. The Apocalypse, which had been seen as the ultimate failure for Evan, is now his only salvation. The outcome wouldn’t be nearly as positive if not for the acceptance of those members of the X-Force team. I guess nurture won out in the end for Evan.

Even with Evan donning the Apocalypse gear, the team isn’t in the clear just yet. Betsy has protected herself against the Shadow King, only to be met by Omega White, who blames Betsy for his brother’s death. Manipulation and power helps Betsy escape from Omega White’s destructive intentions and turn him into a brief ally. Deadpool comes to Wolverine’s rescue, and Wolverine must now face a defining moment in his life.

Daken, seeing how he has failed, comes at Wolverine with everything he has. The years of built-up frustration and regret fuels the rage in him, and Wolverine does his best to keep his emotions in check. As Daken slices into Wolverine, we are giving glimpses of what Daken always dreamed of in his days growing up. This is the saddest moment of the issue. Evan views the entire fight; every blow is recorded into his memory. The events at the end of the issue will likely never leave his memory or Wolverine’s.

I am floored by this issue. It’s far better than I expected, and Remender taps into what makes this series great: the flaws and humanity of each character. Uncanny X-Force is a unique series that offers action paired with the best kind of storytelling. The last issue in this arc is well-done and worth looking into.