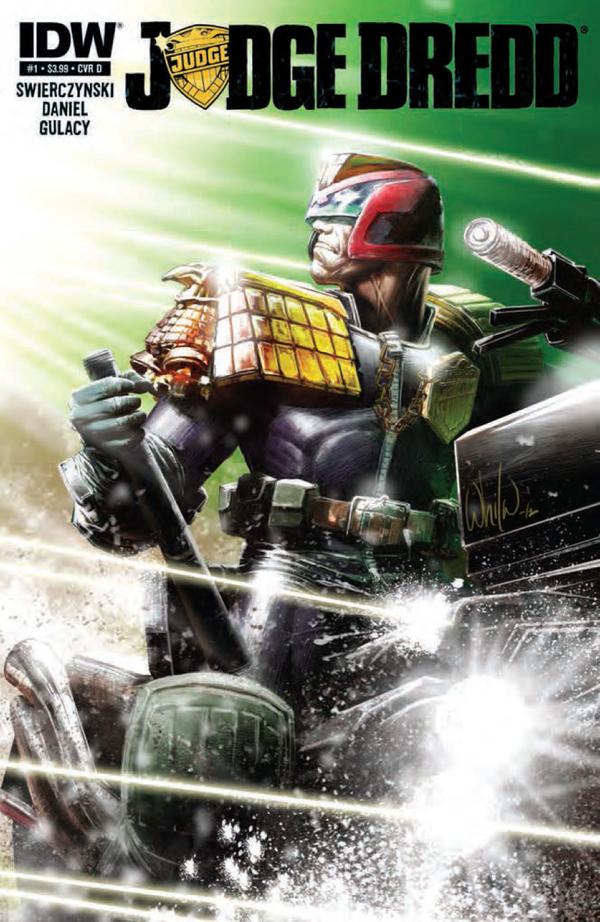 My working knowledge of Judge Dredd before this year was very limited. I know that he came from a British anthology series called 2000 AD and was created by John Wagner but that’s about it. Luckily some of that changed when the movie “Dredd” was released this past September. Being cited as an “accurate” portrayal of the character and his works (Wagner even said so), the film worked in two ways: It introduced me to Mega-City One and all its colorful inhabitants and it made me want to see more of it. But diving into the world of 2000 AD and the stories of Dredd can be daunting for the uninitiated. That’s why I was glad when IDW announced they were making a new Judge Dredd comic, the first American made one in over a decade.

The comic is broken up into two stories, both written by Duane Swierczynski. “Ripe” is the main story and follows a looting gone wrong at the one of the Mega-City One Pleasure Malls. Usually a crime like this would be an easy one for Judges to stop but their progress is hindered by malfunctioning robots and machinery, some of which has explosive results. But Dredd isn’t deterred though and chases down the perps. Problem is, this case might be more complicated than he had first thought.

The second story, a much shorter one, is entitled “Protection Racket,” and deals with a store owner being looted. In normal circumstances a looting would be stopped by the security bot assigned to the store. Problem is (probably partially due to the aforementioned malfunctioning) the bot is tired of being pushed around and decides to get mouthy with the store owner. This leads to a hilarious, if not completely appropriate conclusion, that I won’t spoil for those wanting to read.

I’ve been a fan of Swierczynski ever since Birds of Prey started last year and I can say, though he had some big shoes to fill, he does a fantastic job with these two stories. For someone not familiar with the world of Judge Dredd, he does a great job at easing the new readers into Mega-City One and giving us a story that doesn’t require a lot of explaining. “Ripe” is full of action, explosions and the grit-teethed growling of Dredd as him and the Judges try to take down these perps. “Protection Racket” is played more for laughs and, while a bit shorter than it probably should have been, it’s entertaining, cheeky and shows a lighter side to the city. If Swierczynski keeps up this level of writing, I’ll definitely keep reading.

Art duties are handled by Nelson Daniel (Ripe) and Paul Gulacy (Protection Racket) and both do a great job with their respective story. Daniel’s art is colorful and vibrant, but never loses the feeling of hardships felt in Mega-City One. The brown’s work nicely with the rest of the colors and each panel jumps out at you with excitement. The only gripe I have is that the Judges are a little too similar to tell apart sometimes. I understand they all have to look the same, but sometimes I can’t tell who’s who. Gulacy’s art on Protection Racket reflects the tone well of the story by being bright, clean and almost cartoony in nature. Really enjoyed his artwork a lot on this story.

If you’ve been waiting for a chance to jump onto the Judge Dredd bandwagon than now’s the perfect time to do so. I can’t tell you how this compares to the older stories, having never read them myself, but on its own the comic is well written, well drawn and entertaining from start to finish. Four dollars can be a lot to drop on a comic you know next to nothing about, but it’s four dollars well spent.