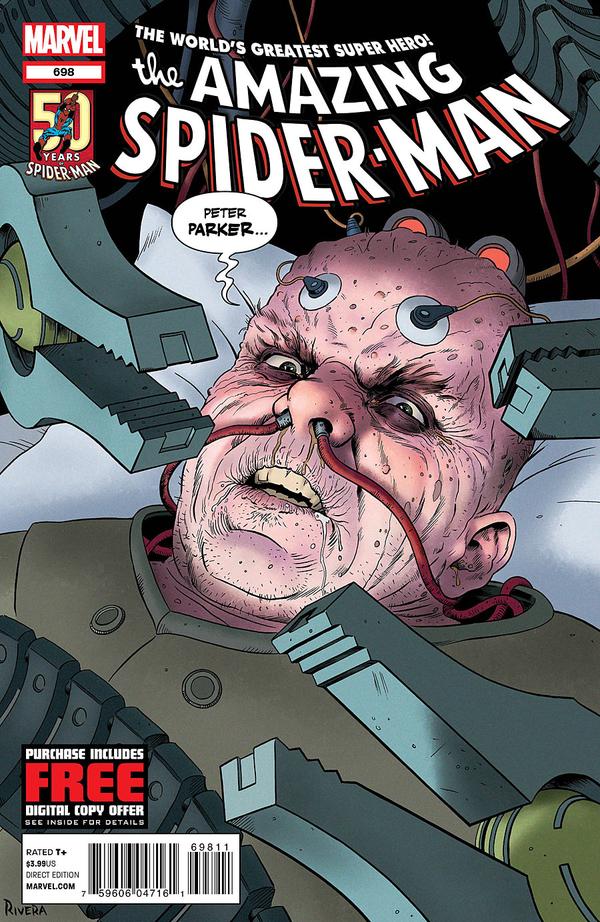 Wow…that’s all I can say. Wow. I didn’t think I could get shocked anymore. Dan Slott has proven me wrong. Amazing Spider-Man #698 has one of the biggest twists I’ve ever seen and you owe it to yourself to see it with your own eyes. Seriously…wow. I can’t wait to hear what everyone has to say about this comic. It’s going to be a huge talking point for the next couple of months.

Things seem to be going great for Peter Parker. So much so that he declares it to be the “Best Day Ever!” He swings around New York City, beats up a criminal, aces his job evaluation,  convinces MJ to talk about their relationship status and visit Aunt May in the hospital. All in all it seems like a really good day, which is great considering his recent troubles with The Lizard, Morbius and the Hobgoblins. But that comes to a screeching halt when Doc Ock, who’s on The Raft (superhuman prison) starts speaking and is asking for Peter Parker.

That’s as much as I’m willing to say. I realize that the big twist has been all over the internet for people to see or read and anyone who wants to know already probably does, but I’m not one to spoil something this big. Dan Slott teases us throughout this issue with situations that seem very reflective or overly happy. Peter is peppy and longtime Spider-Man fans know that when Peter gets too happy, something bad is about to happen. Think of the “officer with two days until retirement” trope and you’ll know what I mean. But when things get real, they get real quickly. By the time the twist happens and we’re forced to deal with the consequences, Slott has us nearly in a state of shock and pushes are faces into the graveness of  the situation. It’s nearly stomach-churning, but I mean that in the best way possible.

Richard Elson and Antonio Fabela handle the art this issue and it is gorgeous. Whether it’s in a dark and crowded corridor or swinging through the city of New York, it’s beautiful. From the opening splash page with Spider-Man, it’s evident that this is going to be a vibrant, colorful and expressive comic that any art junkie will love to have on his wall. Faces are gorgeous, not just physically but in how they’re drawn, and what’s great about the whole thing is how different it looks after you’ve read it once. Yes this is a two-reader for sure and on the second go through you pick up a lot of nuances and brilliant techniques that you wouldn’t have seen before. Hat’s off to the pair of them and everyone involved in  the art team. I’m usually bummed when Ramos isn’t doing art but this is more than I could have expected.

This is probably one of the most important issues you’ll read all year. It’s a comic that will rock you to your core and leave you with a ton of questions. People will be talking about this for months, maybe even years. You’ll look back and wonder what you were doing when you read this issue. I am feverishly waiting for issue #699 and really want to know how this all turns out. One of the best things though is that now I’m excited for Superior Spider-Man. Before I was hesitant, but after reading this issue, I’m really intrigued. Either way you need to buy this issue, it’s a big one.