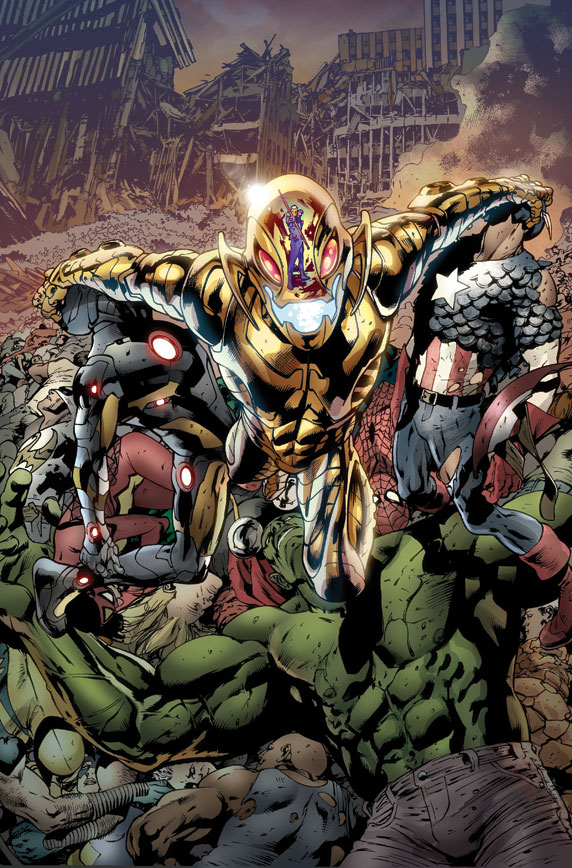 It seems like forever since Age of Ultron was first announced. Originally teased as a major Avengers event, which included a bit in last year’s Point One and this year’s Free Comic Book Day, it has apparently grown into a line-wide event that will affect all of the Marvel Universe. The ten-issue event will begin in March with Brian Michael Bendis, someone very familiar with The Avengers as well as events, doing the writing and Bryan Hitch handling the art. Brandon Peterson and Carlos Pacheco will take over for Hitch after issue #5, which apparently is for story purposes.

During the latest “Next Big Thing” conference call, Bendis had a lot to say about what’s sure to be a highly talked about event. When asked what the story will be about in a nutshell, he had this to say:

“In the vein of Infinity Gauntlet, Secret Invasion and Civil War, Age of Ultron is a massive Marvel Universe-spanning Event. One of our most famous villains, Ultron, the super artificial intelligence, has fulfilled his destiny and taken the Earth. This story touches every corner of the Marvel Universe and will have an amazing effect on things going forward. We have taken the time to do this right- everything is gorgeous, every page matters, and most of all- something I’m very proud of- is that it will be shipping at a furious pace. Every day for the last year and a half people have been asking me when this story will come and I’m thrilled to announce that it is here.”

While I am excited to finally see this hitting the stands, I can’t help but feel like we’re getting a lot of events in a short amount of time. Besides the aforementioned Civil War, Secret Invasion and Infinity Gauntlet, we’ve had AvX and Fear Itself just within the last couple of years. I can’t help but feel slightly burnt out by the whole thing. There are some things to look forward to that differ from the norm however.

The eventual tie-ins, according to Bendis, will be limited to only a handful of series and take place outside the continuity of the ongoing series. Acting like the “Point One” issues, Age of Ultron tie-ins will have an AU next to their name (Fantastic Four #6 AU was a given example). As someone who definitely burnt a lot of money getting almost all of the AvX tie-ins to get the whole story, you’d bet I was pretty excited about this news.

Also exciting news is that this event won’t be dragged out for nearly as long as people think, with the first three issues being released in March alone. An accelerated release schedule is always something to look forward to, especially when you want to get a lot of story out in a short amount of time without having to wait till the end of the year for it to finish. Bendis agreed.  “At this point, doing an event that’s eight months long starts to feel slow. That combined with the fact that Htich really went to town and knocked himself out…it’s a magnificent piece of work.”

One nice surprise for fans of cancelled series is that Moon Knight will be a major part of the event. “Moon Knight is one of the people to make it through, and he’s as shocked as anyone to find that out.” Leading a resistance team alongside Spider-Man (whoever he ends up being) and numerous other heroes against Ultron will definitely be great for people like me who have been waiting to see more Moon Knight.

Bendis ended the call with this: “Literally not a day has gone by over the past year and a half without people asking me on Twitter where this was…I know that people are looking forward to this, so to finally debut it, and for it to be – I imagine – better than people thought it would be is great…it takes one of Marvel’s classic villains to a level we’ve never seen him before, and it pushed our Marvel heroes to a place they’ve never been before.”

So even if I am slightly burnt out, Bendis’s dedication and passion for the project, as well as what’s sure to be an amazing Moon Knight/Ultron story, makes me excited to see where all this is going to end up.