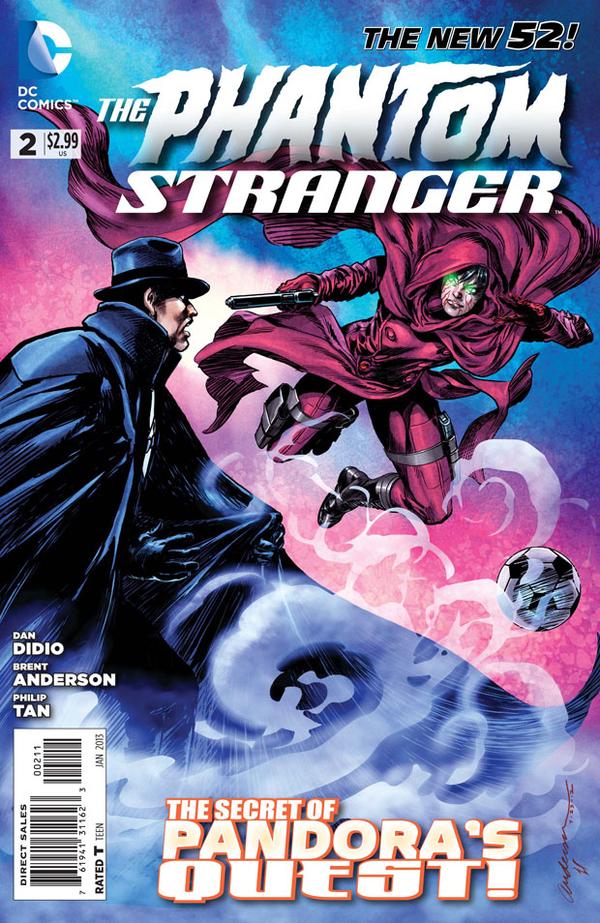 The Phantom Stranger remains a highly divisive book among many comic book readers. Taking an older, lesser known hero, and giving him his own series is always a risk. While it opens doors for new people to be introduced, it’s hard to root for a character when you know next to nothing about him. Add in a visual and writing style that is distinctly old school and you have the possibility of alienating new readers. As someone who’s never heard of The Phantom Stranger before this series I can understand why people may not give this book a chance. But as a fan of the supernatural, I can’t help but enjoy this flawed but entertaining book.

After returning Raven to Trigon in the last issue, Phillip (The Stranger) decides to spend some time with his wife and kids. The peace and quiet he hopes to attain doesn’t last long though as he’s soon approached by Pandora, the mysterious girl in the red hood that caused the New 52. She wants to open up Pandora’s Box again but Phillip, knowing what happened last time the box was opened, won’t help her with her quest. After she leaves, things seem to go back to normal, or at least until they get back home. There, he’s confronted by Trigon’s son Belial who warns him not to try and get Raven back, even if The Voice tells him to. With all these distractions, Phillip begins to wonder if he can really ever have a normal life.

The writing is a bit of a mixed bag for me if I’m going to be completely honest. As a whole it’s probably the best issue yet and really gives the reader a good idea of where the series is going. That being said, getting cameo after cameo can be a bit tiresome. I like the fact we’re getting new villains and heroes added to the New 52 and following up on ones that have been overlooked as of late, but I could have done with one or two cameos instead of four (five if you count the twist ending). Add in the heavy handed cheese known as the dialogue and it can make for a sometimes frustrating read. It’s a solid enough story though to warrant reading.

Brent Anderson and Phillip Tan have really stepped up their game in the art department. The art in the first two issues was solid but too overly stylized for what it was trying to accomplish. In this issue, which mixes the home life of The Stranger with the supernatural entities he sees on a daily basis, it really seems to find a happy medium. When we deal with the supernatural, the colors are vibrant, detailed and distinctive. The shadows, the blacks and the pencils all shine and Tan’s embellishments really make everything look great. In the real world it still looks a little overly stylized, but it feels more low-key and works as a stark contrast to the supernatural elements of the book.

While not a perfect book by any means, in the right mindset it’s a solid read worth your money. The character of The Phantom Stranger is really starting to grow on me and seeing more of him fleshed out in the future will greatly benefit this book. Seeing new villains added is always a good and the supernatural elements, due in part to the art, are a treat to read and witness. The book would do well to cut back on the cheesy dialogue, which is probably keeping many from reading, but I like the direction this series is going in and I’m intrigued to see how everything turns out.