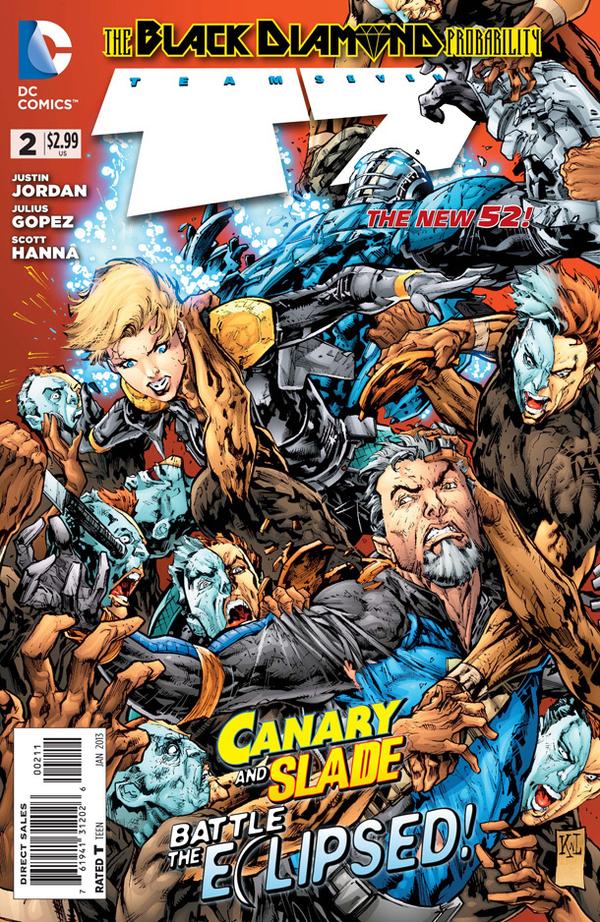 Team 7 is like a 1980s action movie. It’s big, dumb, full of gunfights, explosions and cheesy dialogue but you can’t help but love it. When you consider how many serious comics are out there that focus on the doom and gloom, it’s a refreshing change of pace to read a book that, even in the most dour situations, can remain light and fun. It certainly won’t make anybody’s Top 10 list in terms of writing or artwork, but each month it continues to be worth every single penny.

After realizing that the floating prison is overrun with “zombies,” the team decide to take them head on. When that doesn’t work, they decide they need to go on with mission and find any survivors who could possibly stop this thing from spreading. But what’s going to be harder: dealing with the outbreak or each other?

Up until the last two or three pages the story was basically all I could have asked for. Full of action, explosions, lasers and one-liners, it’s essentially everything you’ve come to want or expect with Team 7. The problem arrives when you reach the last couple of pages and they felt the need to shove in a cliffhanger that is spoiled on the cover. It feels rushed and reads very hackneyed, but I’m still interested nevertheless. The only thing I wish is that this book was goofier. It is chock full of cheese but often plays a little too straight for its own good. As Jordan gets more comfortable, we’re bound to see even more cheese, which is the best thing this book could have.

Julius Gopez and Scott Hanna are in control of art duties for this issue. Jesus Merino will be back (at least according to the solicitations) next issue but for what it’s worth the art isn’t bad. Merino’s art is gritty and line heavy, which works extremely well with the action scenes. Sometimes his faces can look a little weird or older than they’re supposed to (Black Canary looks 50 in issue #1) but it’s distinct and fits this comic perfectly. Gopez and Hanna had some big shoes to fill. They’re art style is cleaner and brighter than Merino’s and it has a youthfulness to it that’s certainly easy on the eyes. Backgrounds are muddy and unmemorable and some panels look really unrealistic or painful for a regular person to do, but overall they do a solid job with what they’re given.

While not as strong as the previous two issues, Team 7 is still an incredibly fun and enjoyable action comic that works on almost every level. I could have done without the forced twist or the straightforwardness of some of the dialogue but overall it’s still worth every dollar and I can’t wait for issue #3.