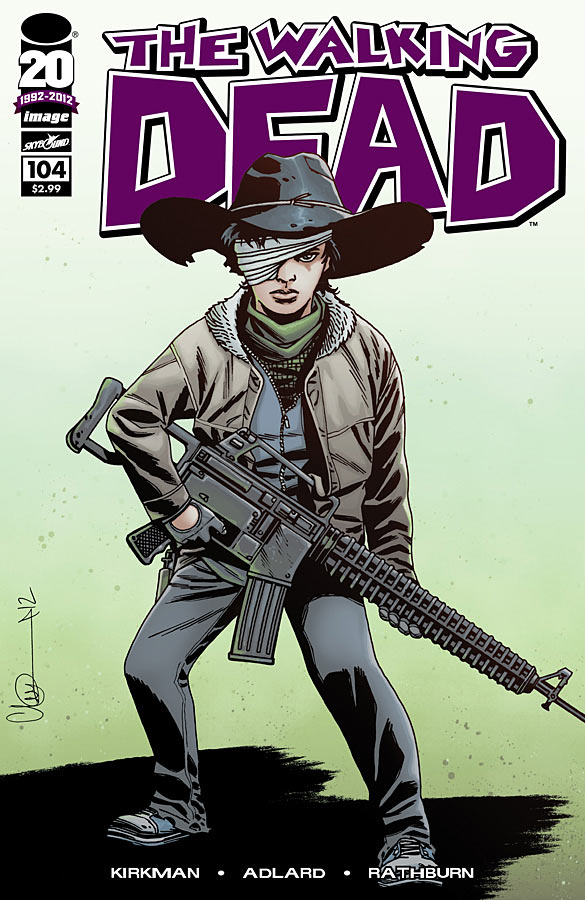 Here’s the thing about The Walking Dead. As intense as this series often is I find that there are simply not enough pages to quench my thirst for this story month after month. After the tragic events of issue #100, Rick and the gang are possibly facing the greatest threat to their survival since the story began … so why are things progressing ever so slowly? I’m all for setting the mood and allowing the threat to sink in, but after waiting a whole month for another piece of the puzzle I can’t help but feel a little let down by this month’s issue.

I’m normally a very patient comic reader. But in the case of The Walking Dead I can’t help but feel like we’re spending too much time playing cat and mouse. As engaging as the this series has been I’ve noticed that there’s a pattern emerging. New friends come into the story > new threat arrives > old and new allies die > more friends are gained > another threat comes along > rinse/repeat. Does that seem harsh? Perhaps, but I’m not that far off from the truth, am I?

Thumbing through this issue of The Walking Dead, once again, I’m wondering why there appears to be so many empty panels versus panels with substance. I’m not so sure that we need 6-8 panels of a car ride back to Negan’s fortress of misdeeds. Maybe you think I’m being a little unfair? “Steve, the reasons they do this is to set the tone and drive home the idea of how isolated each group is in their own way.” Yeah, I get that. But I also wonder why we needed almost two pages to convey one idea, an idea that could have been summarized in perhaps half a page or even two panels?

I’m a big fan of The Walking Dead comic. If you’ve read any of my other reviews of this series you’d know that I am usually front and center when singing its praises, but even the most devoted of fans has a point where they feel as if they’re being taken advantage of. I’m not in any position to instruct someone in the telling of their story, but I’m of the mind that unless some finality to this arc starts to rear its bruised and battered head readers might grow tired of waiting for something of consequence to happen again. Really, there are only so many times we can endure an angry Rick shouting at some blowhard sadist only to walk away with his shoulders hunched, telling the rest of his group to back off.

I’m kind of at a loss as to where to go from here. I suppose the bottom line is that while The Walking Dead is still probably the best zombie related comic book on the market, I can’t help but feel as if we should be getting more story for our money and less atmosphere panels, that just show us more of the wasteland we’ve already been accustomed for 100+ issues.

VERDICT: The Walking Dead is still awesome, make no mistake about that. But after this issue I find myself wanting the story to pick up the pace and to perhaps drop the “back and forth” formula it seems to have grown accustomed to since issue #100. And while I’m in no position to tell someone how to write their book, I can only hope that something truly game changing comes from the little that we got in this issue.