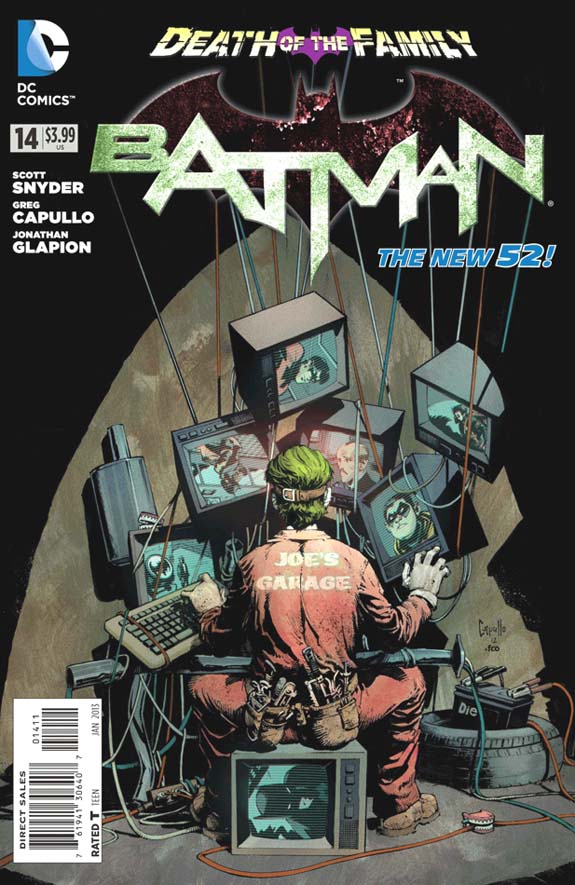 How would you react if the person you cared for the most was taken from you? Would you cry, would you fill with rage or sink into despair? What if you had the opportunity to find the man who snatched this loved one away from you? Could you think clearly, establish a plan of attack, or would you just run head long into a most likely fatal pursuit? These are the questions being asked in Batman # 14, a violent, fervently emotional and deeply disturbing installment is Scott Snyder and Greg Capullo’s fantastic Batman run.

We often saw Batman at this end of his rope in Snyder’s Court of the Owl’s story arc, but that was an attack on Bruce Wayne’s body and mind. This is an attack on his very soul. The Joker knows him better than anyone and he is systematically picking apart the caped crusader right in front of our eyes.  During Snyder’s time in Gotham City he has shown a penchant for exploring the rich history of the Caped Crusader, and his exploration of his number one foe has been no different. There are many references here to their past altercations, and while Snyder uses them to enhance the story, they also dont feel exclusionary to those readers who may be new to Batman’s comic book endeavors.

That’s because, while this book may be full of history, it’s in truth, really about emotions. The Dark Knight is a raw nerve here, and that drives him right into the grasp of the clown prince of crime. It’s in these moments that Snyder pulls off the toughest of sells, the “villain tells the hero his plan” speech. This type of expository musing can be a clunky mess, but here it’s an opera of terror. I challenge anyone to not be chilled by the Joker’s decrees, and to not believe whole heartedly he can pull it off.  It’s a testament to the work being done here that we believe the unbeatable Batman might just fail in his mission.

However, Scott Snyder’s work is just words on a page without his partner in crime Greg Capullo, who once again brings the Joker to life with terrifying precision. His grasp on the maccabre is so in line with Snyder that they feel like they are one entity instead of two. During the climax of the issue there is such a marriage of visuals and prose, that it brings the static images on the page to vibrant life. It’s astounding work, plain and simple.

Buy It – Batman is once again the best example of what big superhero storytelling can be. Scott Snyder’s writing is disturbing, Greg Capullo’s art is chilling and the back up by Snyder, James Tynion IV and Jock is sublime. This is the full package from front to back and I’m both excited and frightened about what’s coming next.