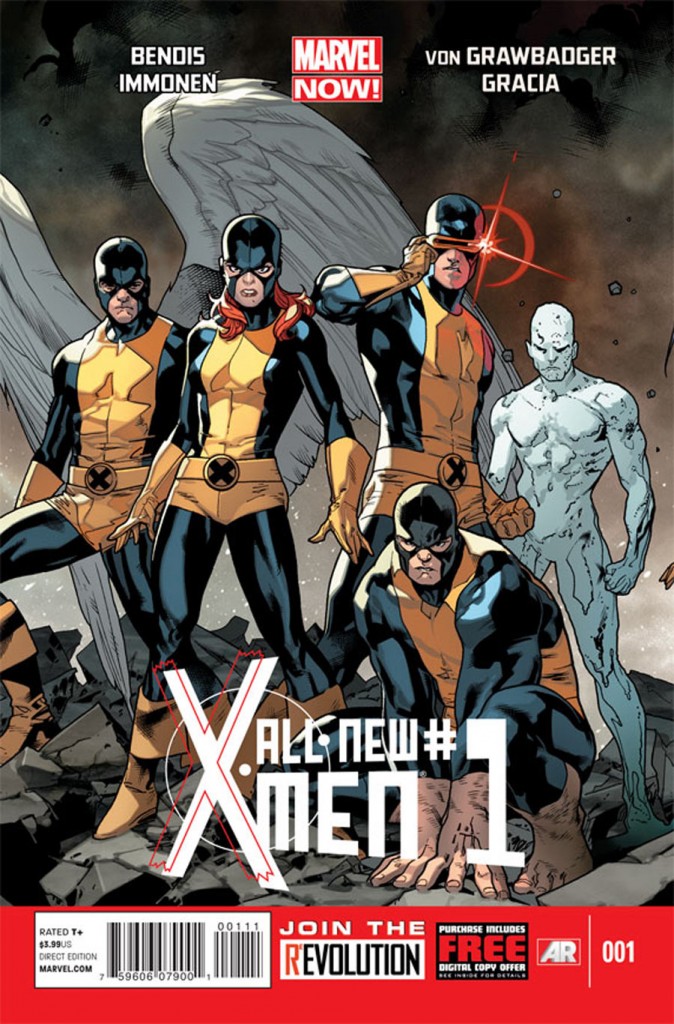 There is something prophetic about the nomenclature of Brian Michael Bendis’ All-New X-Men #1, as it not only describes the new mutants popping up all over the world, but also the fresh direction which the X-Universe is embarking upon. The very conceit, that the original five members of Xavier’s school travel forward in time to face own their cynical future selves, is in its own way exciting and novel.

However, a novel idea doesn’t always mean a satisfying one, and like anything else it comes down to the execution. Well, I’m ecstatic to report that Brian Michael Bendis’ wordy X-Men debut is a great jumping on point that delivers on its premise in every way, and is a book that has me stoked to be on the ground floor of a brave new world for Cyclops and Co.

So, what makes this issue standout? Well, lets get my favorite thing put of the way first and that’s the realization that Beast is the freaking man. Stories are only as good as the character’s who inhabit them, and from word one it is clear that Bendis has the magic touch with Hank McCoy. The blue genius is at once intelligent and emotionally raw. He is a man full of sadness that has burning desire to leave a mark on a dimming world. You see, something is wrong with Hank, a ticking clock hanging over his head, and this fact adds weight to every word that escapes his lips.

The parts of the issue not dedicated to Hank are mostly given to the “new” X-Men and the two they introduce are intriguing and promising entries into the canon. Bendis does not short his other characters either as he gives Kitty Pryde, Bobby Drake and Storm plenty of face time. Their interactions are full of exposition, but it’s laced with so much real emotional context, that it feels natural instead of forced. These three characters all have differing levels of connection to Scott Summers and it’s enlightening to see the way each of them wants to deal with his current actions.

Which is the final wrinkle of All-New X-Men #1, and the thing that sets it so high on my pull list. This isn’t a book about one group of mutants at a school or just about one group living on an island, no, this comic reunifies the universe under one banner. Don’t mistake me, I adore Wolverine and the X-Men and the now finished, but soon to restart, Uncanny X-Men, but I loved seeing the story cut between Cyclops’ revolutionaries and Wolverine’s teachers. It made everything seem bigger somehow and for a tale like this, it’s perfect.

One warning to those unfamiliar with Mr. Bendis, this book has a whole lot of words in it. The panels and pages of All-New X-Men are stuffed to the gills with prose, but it’s never repetitive and it feels vital to the story being told.

I’ve prattled on about story and writing, but what about the art? Well, to put it plainly Stuart Immonen is at the very top of his game. Much like the writing, the art nails Beast, the depiction is spot on, right down to the length and pointedness of his nose. Immonen also manages to render his dialogue scenes intimately and then quickly switch gears to a splash page of Cyclops fighting off a gaggle of police officers. It’s an impressive range that gives the book a lovely dichotomy between old and new styles.

Verdict
Buy It – I’ve greatly enjoyed the X-Men books on my pull list for the last year, but in a way I’ve always felt on the outside of something looking in. Brian Michael Bendis’ All New X-Men changes that. It’s a book short in page number, but high in word count and better yet, those words matter. Bendis’ character depictions feel right and his time travel conceit has the potential to be one of the most interesting story lines this year.
However, the real beauty of the title is that, even as it blazes a new trail for our not so merry band of mutants, it never hides from its predecessor’s rich history. This is a celebration of the old as much as it is the new and it’s a book you all should pick up.