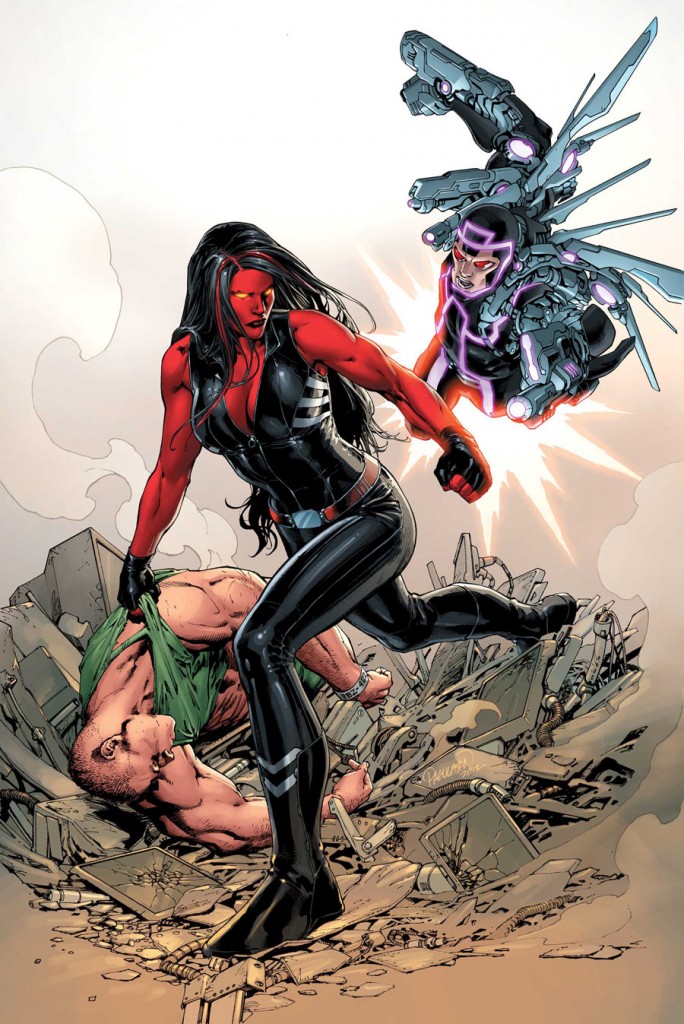 For the most part, this issue is far better than the one that came out last month. Issue #58 viewed Betty as more of an outsider than the main character. We were almost presented with her as an antagonist to the whole story. Issue #59 clears up her name, partly by giving her more panel time, partly by slowly revealing why Betty is out to destroy the Echelon program.

We still don’t have a front row seat to her thoughts, but Betty’s actions and body language says everything about the man she killed at the end of issue #58. While she refrains from panicking, Betty does everything she can think of to save the man. She even goes as far as letting Machine Man administer CPR before attempting to take him down. This is a small detail, but one that illuminates the character’s motives to new readers like me.

Betty is, first and foremost, a scientist. With the exception of mad/evil scientists, most professional scientists are concerned with the longevity and health of the human race. Betty sees the Echelon program as a threat, one that will eventually push humans out. In true Hulk fashion, she tackles the problem in the least efficient way, revealing that her plan is to make the program far too expensive to follow through with and force investors to give up hope.

It would be a boring comic book if things went according to plan.

Red She-Hulk is full of action sequences, lots of punches thrown and implausible outcomes. I mean, a flying car? I can accept a lot of things, but this just seems too out there for me. And don’t even get me started on the jetpack air fight between Betty, Iron Man, Thor, and Captain Marvel.

One more thing…the first page in the book mentions that there is no presence of schizophrenia/dual personality disorder behind Betty’s actions. As a psychology doctoral student, I can’t let this go without clearing a few things up for you. Schizophrenia usually refers to delusions, hallucinations, disorganized speech, disorganized/catatonic behavior, and negative symptoms such as flat affect, alogia, or avolition. Betty shows no active hallucinations (auditory, visual, olfactory, or otherwise), shows no evidence of believing she is someone else, speaks with ease, moves with ease, and has no negative symptoms. Schizophrenia DOES NOT result in multiple personalities. I do not understand why Machine Man would even consider that Betty might have schizophrenia, especially since her actions leading up to the beginning of issue #58 do not show any of these symptoms.

To sum it up, schizophrenia and dissociative identity disorder have nothing in common symptom-wise. This is a pet peeve of mine, and I thought I’d illustrate theses disorders within the context of this comic book. If you have any questions about these disorders, check a DSM-IV-TR for a complete list of the symptomology, prevalence rates, differential diagnoses, and features. Or ask your friendly neighborhood psychologist-in-training!

I liked this issue as a whole. It’s not a favorite by any definition, but I’m excited to see a different kind of female protagonist. Betty is sullen, headstrong, and super muscular. I enjoy seeing her trade punches with Thor and hold her own against fellow female powerhouse Captain Marvel. I believe that Red She-Hulk is starting to get in its groove, and I recommend jumping on now to get the full story.