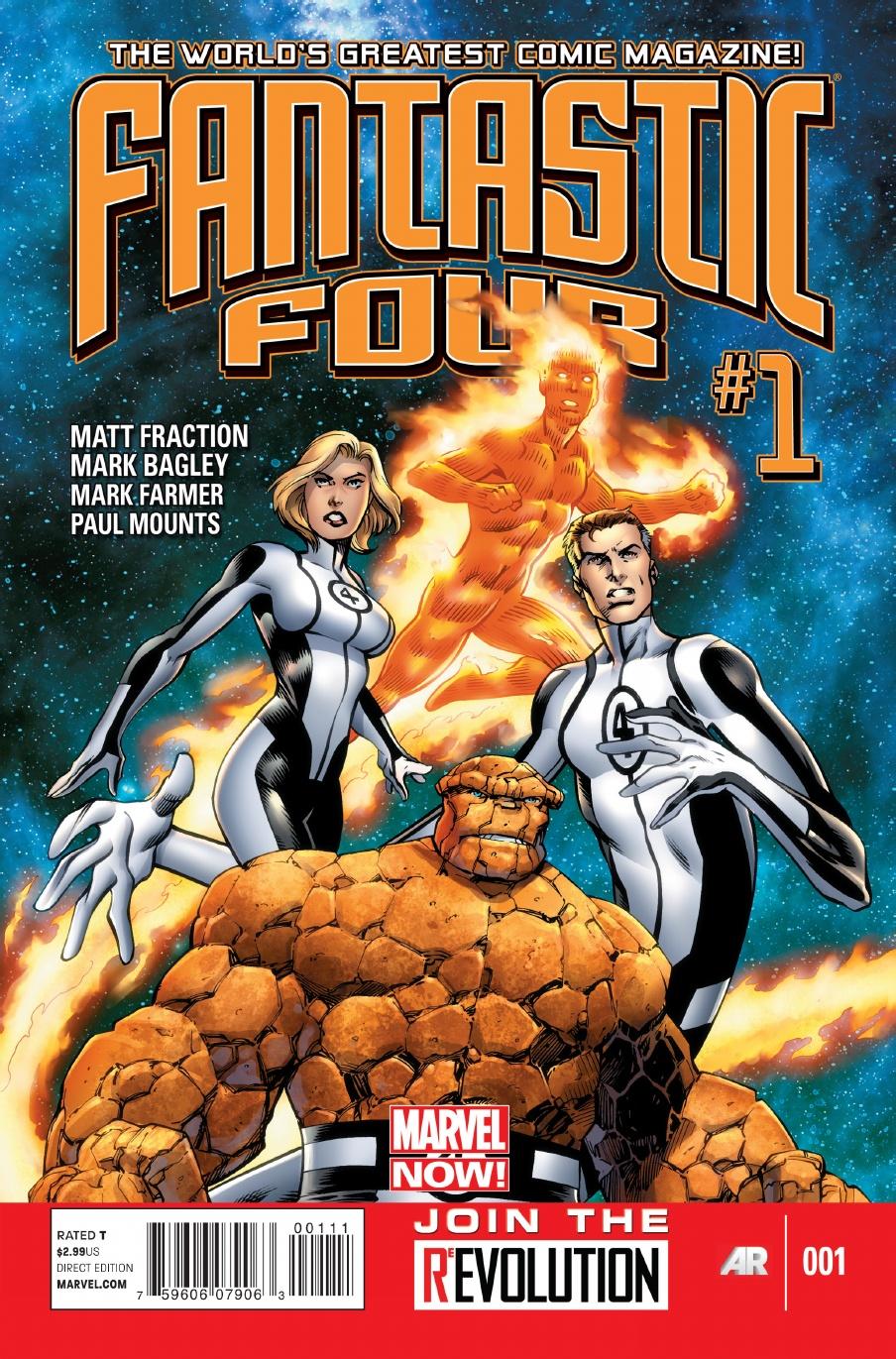 In my time here at Talking Comics, it has been my privilege to act as the “Johnny Appleseed” for the Fantastic Four, sowing the seeds of appreciation among newer readers for what this landmark title has meant to the Marvel Universe in the past, as well as alerting them to the present return to glory through the work of Jonathan Hickman, whose just-concluded run made the Fantastic Four (as well as its sister book FF) a title to relish purchasing each month. Mr. Hickman restored the luster to this shining gem of Stan Lee’s and Jack Kirby’s imaginations, by harkening back to its “cosmic adventure” heyday, and retaining the core values of family, friendship, and heroism that have always defined the Richards’ extended clan. It was with some anxiety, despite my seeming bravado on-air, that I approached the future with the new Fantastic Four #1 by writer Matt Fraction and penciller Mark Bagley. Their task of following Mr. Hickman on this title is akin to being the centerfielder of the San Francisco Giants after twenty years of Willie Mays patrolling the outfield; when someone so “re-invents the wheel”, what can come next that won’t seem a disappointment?

Well, hang on to your hats, because if issue #1 is any precursor of what’s to come, we are all in for one heck of a ride! The Fraction/Bagley team has delivered a remarkable first issue that incorporates elements from seemingly every important run in this title’s rich history, while never feeling forced or “show-offy”. We open on a panel that throws us all the way back to the group’s origin (from the “first” first issue from 1961), before coming back to the present, and then hopping back to 2.66 million years ago (though back for breakfast!), going to the Negative Zone for dinner, and then visiting that hard-scrapple neighborhood, Yancy Street—and all within the first ten pages!

Despite the frenetic pace, we are treated to smaller, tender, human moments, and it is in these that the new team truly shines. Mr. Fraction has clearly done his homework, which he showcases by allowing each of the extended family group their “moment in the sun” that illuminates their characters, both as introduction for new readers, and as a lovely touchstone for us veterans. This title is at its best when the human element is as important as the “super-human”, and that balance is struck here, even to the inclusion of the supporting cast from Mr. Hickman’s FF thrown into the mix.

The cosmic adventure to come is a mystery that Reed can’t solve with anything in the known universe, so he packs up the family, (Valeria and Franklin included) for a road trip through the “unknown universes”, vowing to keep the children nearer, and to make their space/time ship “the greatest classroom ever conceived” for his children. The problem Reed needs to correct is so troubling, that at the conclusion of an otherwise silent two-page investigatory sequence, he quite ominously mutters “Uh-oh”, which is rather like a cardiac surgeon saying “Oops” during an open-heart surgery.

The art in that sequence, as it is throughout Fantastic Four #1, is beautifully rendered by the very talented Mark Bagley, who achieves the same balance with his art that Mr. Fraction does with his word balloons. The sly smile on Reed’s face as he realizes that the “unknown” may hold his answer, or Ben’s exasperation with an old nemesis are interspersed with pages of cosmic grandeur as Johnny has a dinner date in the Negative Zone with a young lady that we will be seeing more of in the near future. The highlights for me though, are the touching moments with Sue and Franklin, where you can feel a mother’s heartbreak for her frightened child. I have enjoyed Mr. Bagley’s work for many years, particularly during his collaboration with Kurt Busiek on Thunderbolts, and as on that title, his ability to shift gears emotionally will be a positive boon to this new venture.

Jonathan Hickman’s stupendous multi-year run on Fantastic Four, during which he returned this book to relevance, is one of the most astounding “come-backs” in comics history. With the footing restored, the new team of Fraction and Bagley, albeit with this small sample, seem poised to bring an even bigger sense of fun and family to this title, while not losing the cosmic nature that Mr. Hickman brought to the fore-front once again.

VERDICT: With Fantastic Four #1, Messers Fraction and Bagley have given us a book that celebrates all that is great about the Fantastic Four , but also speaks volumes about the broader scope of comic book story-telling in this new age. No matter the nay-sayers, it is still possible to blend grand scale epic plots and fun, family adventure (with just a soupcon of danger) into a book that all comic readers, whatever their age or gender, can read, enjoy, and champion to all who would hear! Needless to say, this book is highly recommended!

Soundtrack: Parts of this essay were written whilst listening to the aptly-titled 1974 album “Meeting of the Minds”, by another “fantastic” foursome, the Four Tops.