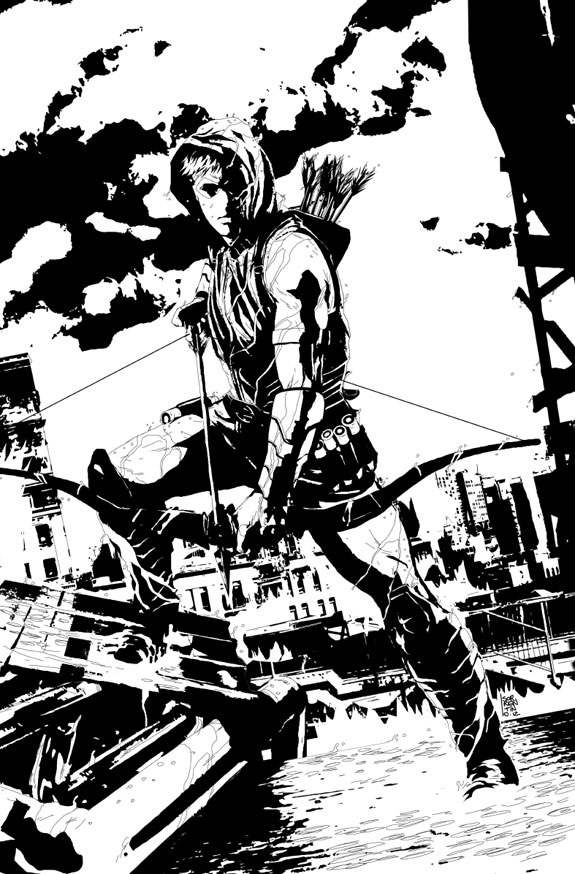 Earlier today the news was broken that there would be some additions and changes to the DCU. One of the biggest announcements, besides that of two new titles added to the New 52, would probably be that of Jeff Lemire taking over writing duties from Ann Nocenti on Green Arrow starting in February. Joining him on art would be Andrea Sorrentino, who has become renowned for his work on the critical darling I, Vampire.

When Lemire was contacted by Dan DiDio, he wasn’t exactly sure how to take it, as he explained in an essay for MTV Geek. “Oliver Queen was never a character I’d had any particular affection for. I love DC comics and love DC characters, but Green Arrow was never one of the guys I gravitated towards.” After thinking about it he came to the conclusion that he wanted to write Green Arrow and had a distinct plan in mind for the character.

“Green Arrow is a character that always has the potential to be a major player in the DCU. When I took on Animal Man, I immediately saw it as a chance to do my version of the classic Vertigo horror/superhero books I loved as a teenager. And, similarly, the first thing I thought of with Green Arrow was a chance to do a really hard hitting, crime/superhero book in the tradition of Mike Grell’s classic run on the character or Denny O’Neil’s The Question comics from the late 80’s early 90’s. Quite simply, I wanted to make Green Arrow a hunter again. A street level hero of the gutters caught up in a world of violence, betrayal and conspiracy.”

On bringing in Sorrentino, who had otherwise been mostly known for his horror work, he had this to say: “Andrea Sorrentino’s stark and beautiful artwork on I, Vampire had caught my eye last year when I was looking at preview copies of the New 52 books. And, I’ve continued to follow him ever since. While his work is perfectly suited for the horror vibe of Vampire, I thought that putting him on a character like Green Arrow would create an amazing tension and a really unique take on a DCU superhero. And boy, was I right. His work so far in Green Arrow has been the absolute best of his career. This is one beautiful looking comic book.”

Jeff Lemire will be taking over for Green Lantern with issue #17 in February. Be sure to check it out if you get the opportunity.