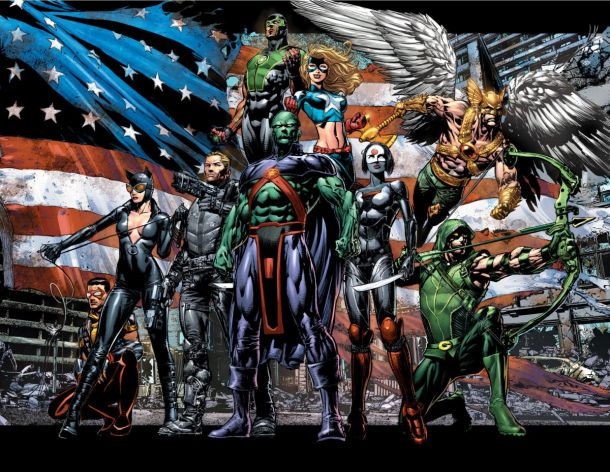 Besides the upcoming Scott Snyder Superman series, which has comic fans everywhere still salivating, probably the biggest comic announcement for DC was that of Justice League of America. A new team book arriving in February and featuring a unique and varied group of heroes grabbed many people’s attentions and DC is hoping to make JLoA the biggest event of 2013. One way is by giving out 52 DIFFERENT variant covers for the first issue. Besides the regular and black and white cover there will be 50 other covers, each focusing on a different state in America. Needless to say this is going to be crazy for completists out there. In an interview with MTV Geek, Dan DiDio explained the reasoning behind so many variant covers. “Given the title of the comic and the year in which we’re announcing — an election year — we wanted to celebrate the country, as well as the various states.”

In that same interview, Geoff Johns had plenty to say about his upcoming book and why it’s going to be so important to the DCU going forward. “There’s a real opportunity to unlock the potential in every hero — no matter how obscure they are — in fact, it’s a challenge that I always find compelling. Anyone can be A-List and that’s what the Justice League of America is about. That’s what makes working with an artist as amazing as David Finch on this book really work – he elevates them with his art. To see David pour his talent into this team shows they’re worth something. And they are.”

Besides reintroducing Vibe and Stargirl into the New 52 universe (with Vibe getting his own series), the series will hopefully be a new starting point for struggling characters like Hawkman, Catwoman, Martian Manhunter, Steve Trevor and Green Arrow, who have all had troubles in their own respective series. “I want to push this book and these characters in a direction that doesn’t only focus on upping their abilities or re-defining their powers, but opens them each up to find out what’s holding them back. What’s keeping them from becoming the world’s greatest heroes? Is it the world’s problem or is it theirs? Some of them have nothing to lose, some of them have everything, some of them already lost it all, and some of them are burying their past and their problems so deep, confronting them could end up threatening everything the Justice League of America has helped them grow to become.

Geoff Johns and David Finch seem to have got everything planned, even the direction of the first arc. “Specifically for the first arc, David and I will be introducing a secret society of super-villains that’s going to redefine what it means to be a super villain — and like these heroes, even unlikely villains can become A-List — look at Black Adam, Sinestro or the Rogues — the villains have just as much potential as the heroes…and that’s another story to come…?”

I know I’m excited to see how JLoA turns out and hopefully all of you are as well. Justice League of America #1 will be released in February.