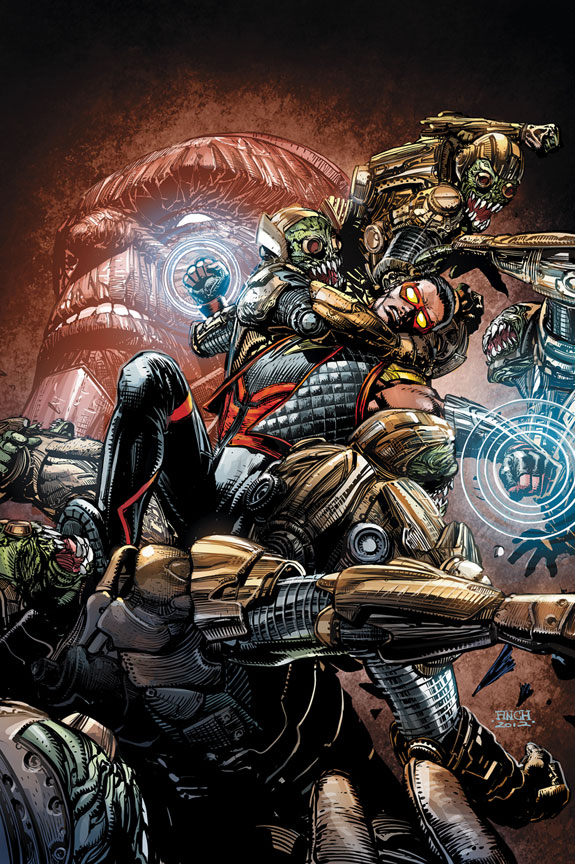 Andrew Kreisberg may not be a household name yet, but anybody who’s watching The CW’s hit series Arrow (a loose adaptation of DC’s Green Arrow) will probably recognize him as one of the creators and head writers of the show. But Andrew isn’t satisfied there. No, now Andrew is heading over into the comic world with one of the newest additions to The New 52: “Justice League of America’s Vibe.” While the title may not exactly roll of the tongue, seeing this forgotten breakdancing DC hero come back into the spotlight is a treat for fans who actually cared about him.

Andrew took that forgotten approach when coming up with the concept for the book.  “I asked the producers who was the least-respected super hero in the DC Universe. They were both unequivocal and unanimous. It should be Vibe, the early 1980s hero who, if he was remembered at all, was the world’s first break-dancing super hero. I saw it both as penance and an amazing opportunity to do something fresh and exciting. Anyone and everyone will turn out to read a new Superman or Batman title. But to get people to not only buy a Vibe comic but have them think he was cool… that would be a victory on par with Vibe’s in my episode of JLU! (Justice League Unlimited for those wondering)“

With the idea of making a fun and cool comic that everybody can enjoy (although breakdancing may or may not be included), Andrew set out on making a new Vibe that audiences everywhere could enjoy. And with Pete Woods on art. how could you go wrong?

“Cisco is a normal Hispanic teenager in Detroit… he goes to school, has a job, is ignored by his parents and both loves and loathes his ne’er do well brother, Dante. Normal… except that after being caught in the event horizon of a boomtube when Darkseid invaded Earth 5 years ago, Cisco has acquired the ability to generate vibrational forces. When we meet him, he has no plans to be a superhero. But when his powers become known to A.R.G.U.S. and Amanda Waller, Cisco is recruited by Agent Dale Gunn. Detroit is an inter-dimensional hot zone. Any number of beings and creatures are able to enter our dimension through the motor city. Cisco is the only one who can sense these incursions… and fight them. And so, to save our dimension from dark forces from beyond our Universe, Cisco becomes the super hero known as Vibe.”