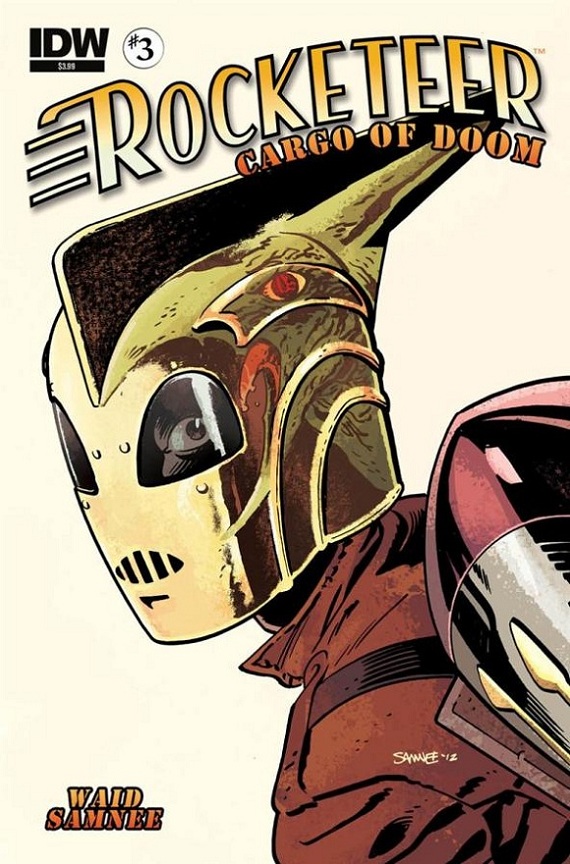 The Rocketeer: Cargo of Doom #3 Review

I will start by saying this: I’m kind of disappointed. Not in how the book turned out, or with the quality with which it was executed with, but I kind of wanted the bad guy to get what he wanted…Because it would have been one of the most awesome things I could ever have imagined.

That said, Mark Waid and Chris Samnee continue to dominate the comics world by putting out another ridiculously fun, and beautifully rendered book. I’m starting to think that you could throw them any idea, or character, and they could make a book that you would thoroughly enjoy. The Rocketeer seems to fit them to a tee, though. It’s naturally a lighthearted book, and Waid is able to just have fun with the content from there.

In Cargo of Doom #3 there is plenty of dinosaur action (which is awesome!), and, you know, Cliff getting out of the mess he got himself into—the typical Rocketeer jazz. While there is no payoff to the dastardly plan revealed in issue #2, it is still really great to see a Jurassic Park: The Lost World-esque situation to unfold.

While the dinos are great, it’s the humor that will stick with you from this book. I laughed out loud quite a few times while reading. The moment in particular that stands out is Cliff asking the crowd of adoring fans for suggestions as to how to save them. It reminds you that Cliff, though he acts as if he is a big shot hero, is just a bumbling, somewhat lucky guy who just tries to do well.

It would seem that, despite my call in my previous reviews of his work, that Chris Smanee is still a man free to roam as he so chooses. Somebody really needs to get on that, by the way. Still, with all his time not being chained to his desk, he is able to continue to bring top-notch pages in Cargo of Doom. He fits the book so well—it’s like a match made in heaven. Dare I say it? I may be preferential to Samnee’s work on The Rocketeer over all others, save Dave Stevens.

I think you know what I’m going to say here. Without telling you of my love of all things dinosaur related, it’s extensive, and without praising the super-team of Waid and Samnee any further: buy the book.