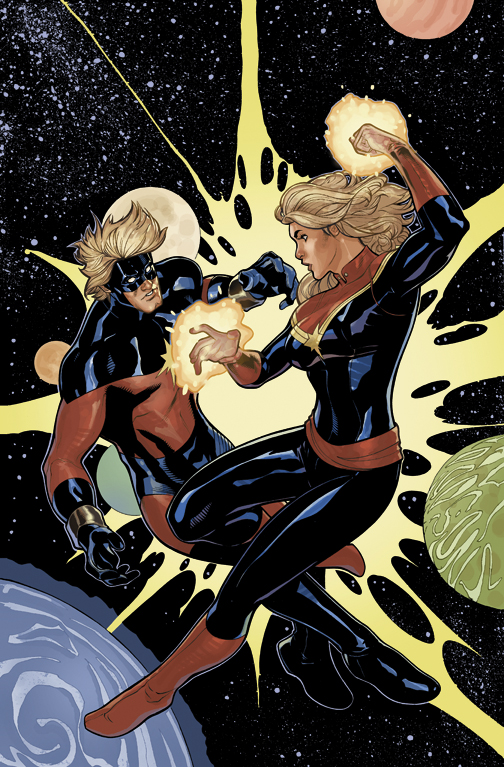 It should be no surprise that I love Captain Marvel. In fact, I would be surprised meeting someone who read this series and didn’t fall immediately in love with it. One of Marvel’s ONLY female titles, Captain Marvel downplays the stereotypical females “issues” and focuses on what it means to be a person. I think the letters page said it best:

“As we put the finishing touches on this first arc, I want to commend the whole gang, Kelly Sue, Dexter Soy, Emma Rios, Alvaro Lopez, Jordie Bellaire, and of course Steve Wacker for creating a series that we’ve long been missing in the Marvel line – – about a hero we can champion, who is strong, badass and loveable – – and who just happens to be a woman.”

Chew on that for a moment.

Despite the time travel in this arc, I’ve been excited to read every issue. The 6th issue brings it all home when Carol and Helen Cobb (from the past) are transported to the site where Carol receives her powers. This is an ingenious way to establish a Ms Marvel origin for new readers. In a few short panels, readers get the gravity of the situation and understand how hard it is for Carol to simply sit on the sidelines and watch. The former Captain Mar-vell, who is recently deceased in Carol’s timeline, shows up as scheduled to the site to fight Yon-Rogg and save the day. Helen makes an observation during this scene that pretty much sums up everything:

“You’re like a tea kettle on a hot stove, kitten. You know that? Brimming with power and potential – and everything you’re  made of is fighting to keep it inside. Every minute of your life…you’re trying not to explode.”

Carol’s actions during the time of receiving her powers could potentially keep her from ever becoming a superhero. It is at this very moment that Carol must decide if she is capable of carrying on the Captain Marvel mantel.

Jessica Drew, aka Spider-Woman, makes an appearance in Carol’s timeline to check on her sick friend, Tracy Burke. Jessica’s brief moments in this book makes me giddy for team-ups and future Spider-Woman issues. I’m reading far too much in one character’s appearance, but a girl can dream, can’t she? Maybe I’ll write into the letters page…

Speaking of which, the letters page is one of my favorite things about this series. I love reading what other fans think about the series. The editorial team does a fantastic job addressing concerns, reinforcing Captain Marvel’s longevity, and letting readers fangirl/fanboy over their favorite parts.

My belief is that you vote for your favorite comic books with your money. Every sale of Captain Marvel tells Marvel that this is the comic book we want to see on the comic stands every week. We now have Red She-Hulk, and I’m ready for more female-lead comic books from Marvel. Captain Marvel is worthy of your vote, and you’re going to get hooked on this well-written, well-drawn character.