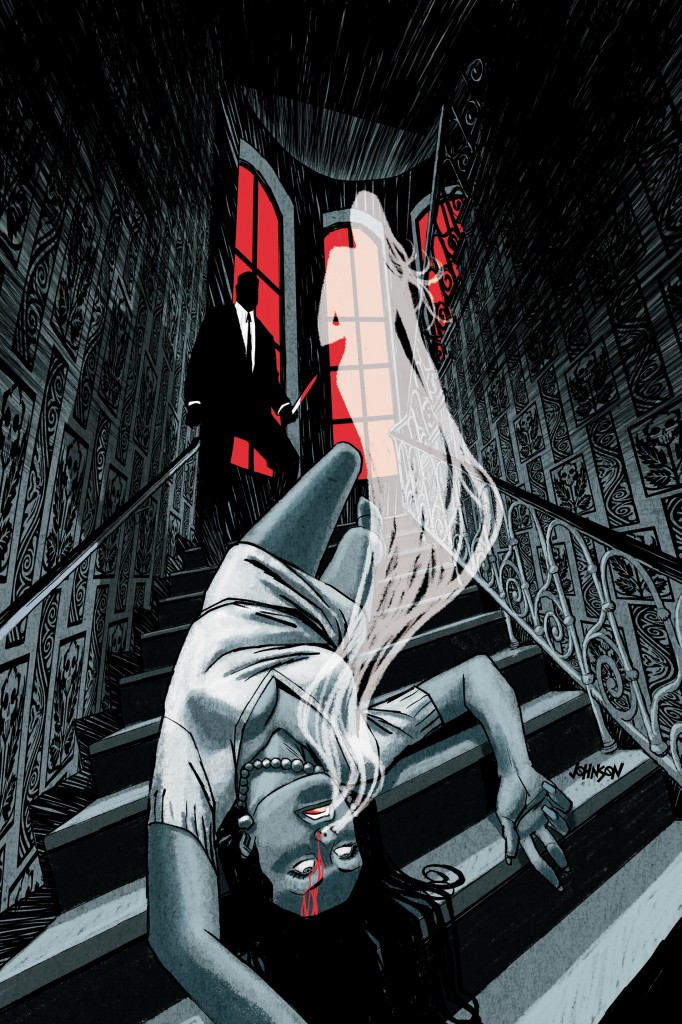 I wish I read this on Halloween night instead of the day after Halloween. Although I’m not a fan of scary stories (or gore, or mummies, or blood…), I am 100% behind Ghosts. For those out of the loop, Ghosts is an anthology of paranormal stories written by, well, just about everybody out there. They range from plausible to downright odd and deal with ghosts, devils, ancient gods, and space pirates. There are nine separate stories, each unique and creepy in its own way. I don’t want rehash the entire book, but I will hit some highlights along the way.

A fun look at a classic “what could have been” story: relinquishing youth and moving onto the adult world. When our protagonist is met by the ghost of his past, he starts to see the differences between who he was and is today. There is an id vs. ego struggle going on in this short story. A nice, small twist at the end really pulls the whole story together.

I wasn’t sold on this story. Despite influences from Neil Gaiman, it wasn’t my favorite story in the anthology. However, the story isn’t a standalone; the second part of the story will be continued in the next Vertigo anthology. The Dead Boy story definitely carries overtones of the paranormal with a healthy dose of childlike cuteness. The Dead Boys must search for a “superbrave kitten” named Twinkle. A strange creature quickly interrupts their detective work, and the door is open for more blocks to finding Twinkle.

Very beautiful, poignant story. The title of this anthology is Ghosts, and not all ghosts are scary. Some are remnants from our past that haunt us in a different, more personal manner. I’d like to think of this story as a cautionary tale for those in love. When we follow a married couple through their life, we see their mistakes and how they grown apart.

The Boy and the Old Man

Story and Art by Joe Kubert

This is Joe Kubert’s last story. It’s unfinished, but it is a great addition to this anthology. Kubert tells the story of a grandfather’s last moments and the devotion of a grandson. Set in Mesoamerica, the boy and his grandfather must battle Quetzalcoatl for the life of the grandson. The ending is mysterious and odd, but maybe I’m not reading enough into it. It’s up for interpretation by the reader.

A Bowl of Red

This particular story reminds me of one written by Neil Gaiman in Fragile Things: Sunbird. Both have elements of the mysterious otherworld, something that few people are aware of. A Bowl of Red centers around the perfect bowl of chili and a run-down diner that serves it for a steep price. Professional food tasters allow curiosity to get the best of them as they attempt to eat this sacred bowl of chili.

I love Phil Jimenez’s artwork. His detailed characters and intricate backgrounds add to the surreal story in Bride. Honestly, I feel ok saying that I don’t know exactly what is going on in this story. I love the way it jumps around from past to present, and I love that I don’t know what happened. In general, we expect too much explanation from our stories. This is another story about love with a hint of crazy and cannibalism. Bride is one of my favorite stories in this anthology, especially since I’m super creeped out by it.

Story and Art by Paul Pope

Speaking of getting lost in a story…Treasure Lost had a very slow start. I kept getting distracted by everything, and I couldn’t get into the story right in front of me. A predictable story in general, and the artwork isn’t my cup of tea. Despite these concerns of mine, it is a change of pace from the other stories in this anthology.

Story and Art by Gilbert Hernandez

One of the best endings in this anthology. It’s cute, thoughtful, and a story that I would share with kids. The Dark Lady is worth reading a few times to get the whole gist of the story. Like the boys in the story, I wonder who the lady is and why she puts the flowers on the graves in the cemetery.

Finally, we have a powerhouse couple bringing us a fantastic story. Two brothers, one deceased, run a business that involves scaring people for money. It’s all well and good until the brothers run into a moral dilemma. Lemire’s artwork is his usual outstanding standard, and I enjoy this side of Johns’ storytelling. Johns should do more Vertigo work…

Even though it comes with a $7.99 price tag, it is a great anthology. Not every story is a hit, but when the story hits the right note, it’s magic. Ghosts has something for everyone, and is a great way to get non-comic book readers interested in the medium. Buy, share with your friends, and enjoy post-Halloween.