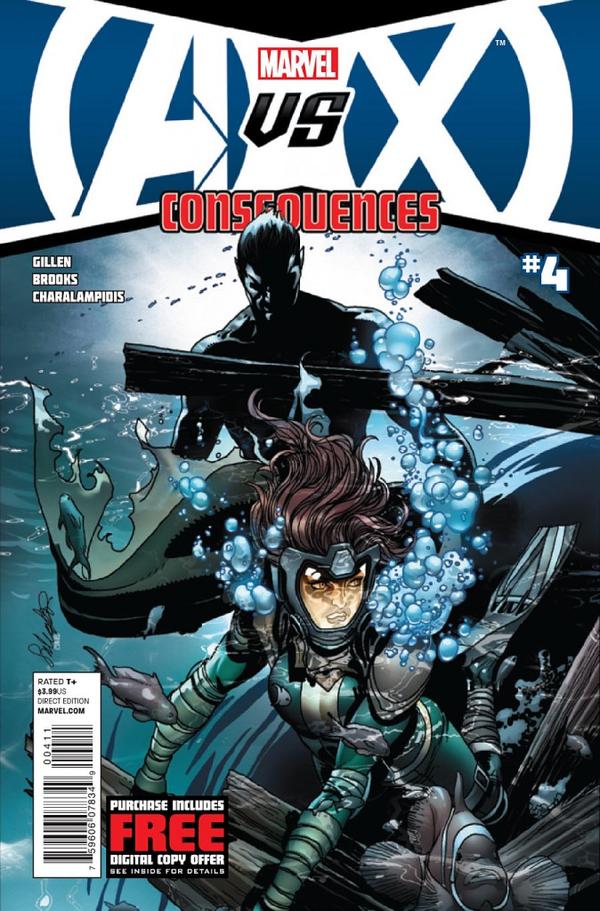 In this week’s installment of Avengers vs-Men: Consequences, we see Iron Man visit Cyclops in prison, Abigail Brand working with one of the fugitive mutants, Hope looking for the whereabouts of her father, and Storm confronting Colossus. Iron Man is visiting the prison because he wants to scan Cyclops to determine if the distorter really did help create mutants. Scott is hesitant at first but really does want to help if it means mutant-kind can be helped in any way. Brand is helping run interference for Magneto because she is part mutant as well as part alien. Magneto appreciates the help but Brand doesn’t want to get caught so she limits their connection. Hope, still mad about Cable deserting her after X-Sanction and AvX, goes underwater in search for records to help her find him. While there, she finds Namor who is still dealing with being the first to lose his Phoenix powers. Let’s just say he isn’t happy. While all this is happening, Storm finds Colossus and tries to get him to turn himself in.

This week’s issue takes a best of both world’s approach, utilizing the tight focus of issue #2 with the large scope of issue #3. Gillen has done a fantastic job putting all the pieces out on the table and by the end of issue #4 we start to see all of these pieces come together. Whether it’s the mutants vs Avengers vs mutant-hunters aspect, the eventual jailbreak of Cyclops (that we all knew was going to happen) or whether or not the missing Phoenix members will turn themselves in, we get a glimpse at how most of these stories could play out come next week’s finale. Gillen, in 4 issues with Consequences, has almost written a better story than multiple writers could do in thirteen with Avengers vs X-Men.

In charge of art duties this week is Mark Brooks. Brooks is a detail oriented guy and, unlike last week with facials, he focuses more on the overall person, especially when dealing with costumes. Right from the first page with Iron Man’s appearance it becomes apparent just how much detail he puts into a costume. While the design of Stark’s costume can be a bit much for some, I found it to be quite a spectacle to look at and I appreciated the hard work. Colossus, Storm, Magneto, Hope, everyone looks better in their outfits this week than they’ve looked in months. The only issue is that some of the face work and proportions are a little off. It’s not such a big problem that it ruins the art, but it appears often enough, especially in close up panels, to where it’s something worth mentioning.

Avengers vs X-Men: Consequences has been a great story so far and with next week being the finale, I’m excited to see how this all ends up. Gillen has laid out a fantastic groundwork for things to come and hopefully it all pays off. Brooks does a good job with art, especially in the costumes and outfits worn by all the major players, but sometimes the face and proportions can be slightly off. Otherwise though it’s a must-buy for fans of AvX, as well as people who have been keeping up with the series so far.