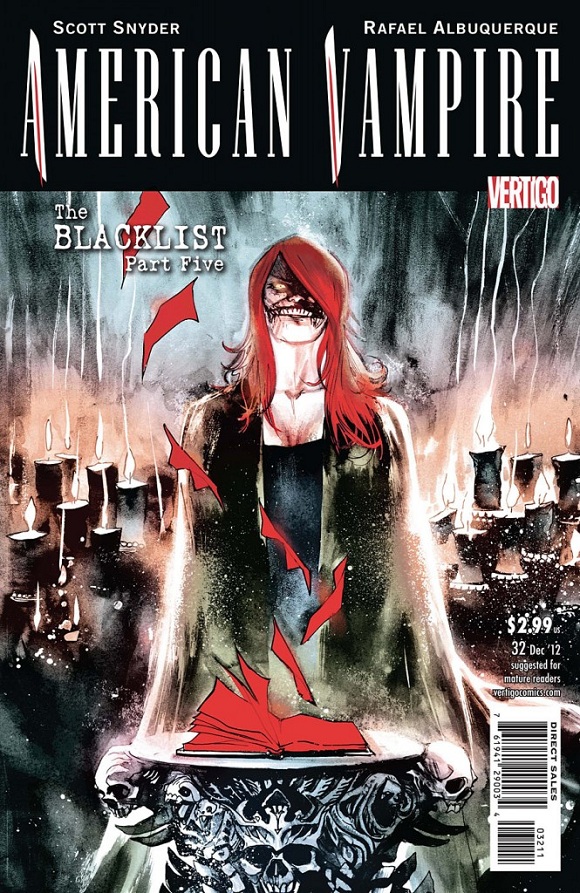 Revenge, it’s one of the most powerful motivators that can afflict the human form. It would seem that is true for vampires as well. With Hattie jumping back into the thick of things in American Vampire proper, repaying the pain that our girl, Pearl, caused seems to be the catalyst of the coming change that Scott Snyder has promised.

In this issue Snyder tells the tale of how it is Hattie came to be in the position of power she holds. It further elaborates on stories that have been told before, and adds some almost obsessive, and psychotic, elements to Pearl’s former best friend. It’s really chilling to hear her story and just how much Pearl was a driving force behind what she has done. It has been teased that Skinner would be returning to form sooner or later, and this is the issue that finally sees that happen. It’s been odd seeing Mr. Sweet almost leashed, but this is more of what we have come to expect from him—and it’s pretty awesome.

As has been the set up for most of this arc: when things seem to be looking up, the drastically shift right back to bleak and tragic. While Pearl may have escaped her captors, with some help from Calvin, the final page is bad news for our main characters and superbly well done.

I’ve been saying all along that this arc is the best work we have seen out of Raphael Albuquerque, and he most certainly doesn’t disappoint with #32. There are some great scenes of death and destruction that the vampires of this series so aptly deal out, but the human aspects that the characters maintain are what will endear you to the story. And that duality is really what this series has had at its heart from the beginning. It is what Pearl struggles with at her core, and it is phenomenally portrayed and conveyed through the artwork. Their emotions are unchecked, as they should be when the stakes are as high as The Blacklist has set them. Albuquerque is showing his prowess as an elite artist, and hopefully this will lead him into more work throughout comics. I would honestly pay for anything that he is a part of, just to see what he is able to do next.

This isn’t the punch to the gut that most of the chapters of The Blacklist have been, but it is a solid lead up to the final confrontation that imminently approaches. You’re getting two creators that are both trending to the top of the industry, and they’re doing it together. I will not say it again, but do not miss out on this book.