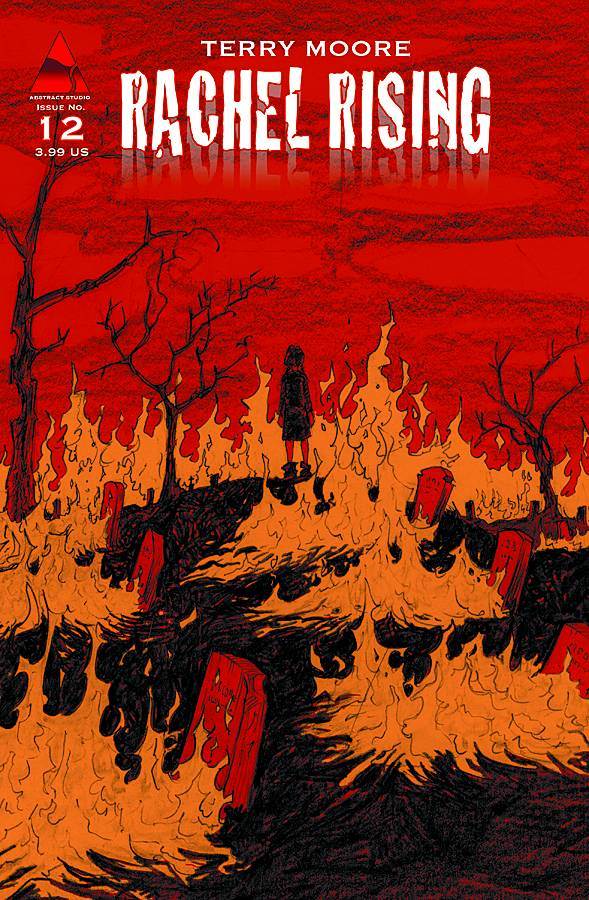 I’ve become something of a Terry Moore fangirl as of late. I read the first couple of issues of Strangers in Paradise, and now I want more. What’s interesting about Moore’s style is that he is in for the long haul. He can hook you pretty quick, but he’s straight with you. No gimmicks, no flashy splashes, just honest-to-goodness fantastic storytelling.

Rachel Rising is no exception to Moore’s style. He hooked us in the beginning with a strange resurrection, and now is hitting us hard issue after issue with new information in this horror comic book. Issue #12 deals more with Jet’s situation than any other character. The entity within her, Malus, is out to get what he wants; namely, Malus is looking to bring the antichrist to the world through Zoe. The two characters have a connection, especially since we now know that Zoe cannot die. Malus blames the witch (Lilith) for Zoe’s life, and we find out that Malus and Lilith are in some sort of eternal battle.

Malus, using Jet’s dead body, looks for a new host in an unlikely candidate. I suppose he has to be on the run after revealing who he is to Zoe, but it was heartbreaking seeing Jet die once more. I wouldn’t put her out of the count, though. I have a suspicion that there are more forces than just Malus that can resurrect a dead body. Rachel is proof enough. Speaking of Rachel, we finally see her again, and she is not happy.

Moore drives his story home with silent panels from time to time. Sometimes comics get so bogged down with dialogue and monologues that it is difficult to appreciate the artwork. When the scene calls for silence, Moore isn’t afraid to give us just that. We can imagine what’s going on in the head of the characters without actually reading their thoughts, and I love the fact that some moments are bigger than words. When reading Rachel Rising, be sure to appreciate the artwork and how it plays into the story.

I say this every month: buy this comic book! The trades are coming out soon, which means EVERYONE can catch up and support this artist! Moore has done fantastic work in the past, and the first twelve issues of Rachel Rising are evidence of his ability to weave a story. Buy this issue, buy the trades when they come out, and prepare to get sucked into one of the most original comic book stories out there today.