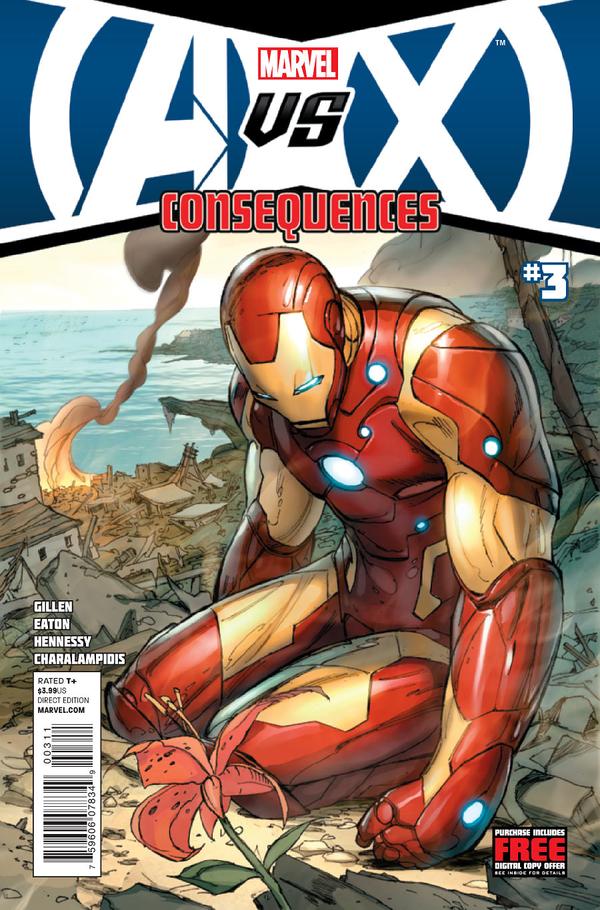 After the events of last week’s issue, we shift the focus away from Cyclops and Wolverine and instead take a look at what some of the other major players from the series have been up to since Avengers vs X-Men ended. Iron Man is in K’un-Lun trying to help rebuild the city, Kitty Pryde is trying to get help from Emma Frost, Storm gets an unexpected visitor back home and Hope is adjusting to life as a normal teenage girl. That’s not to say Cyclops isn’t busy though, he’s just a little preoccupied trying to save his own skin.

While I preferred Gillen’s writing last issue when he mostly spent time with one or two people, he manages to balance out a larger, more spread out cast with enough depth to warrant their place in the book. Granted certain people only get a page or two to get their point across, but Gillen is a talented enough writer that he makes it work. Where the book really shines though is in his moments with Cyclops and the new mutant Jake. It’s obvious that Cyclops isn’t exactly in his right mind when it comes to most things but glimmers of his old self shine when he’s talking to Jake about the dangers of being a mutant in this world. It’s nice to see that the Scott Summers I knew and love is still in there somewhere.

Art duties have been handed over to Scott Eaton and Andrew Hennessy for this issue and for the most part they do a really solid job. One stark difference I noticed right off the bat is the facials. A lot of detail is put into each character’s face and it really adds a lot to certain points in the script. Some of Cyclops’s dialogue could have come off a lot different had there been a different artist involved and it’s nice to see that level of detail in the book. Because of this focus on the face and body language of each character, some action scenes, backgrounds and effects can look not as sharp as they should be. There’s also a few instances where background characters faces look really off or oddly spaced, but these instances are few and far between.

If you’ve been reading the series so far, I don’t see any reason why you should stop now. While it sacrifices the tight storytelling we saw last issue, Gillen does a solid job spreading out the world and giving us a glimpse at the bigger picture, all while showing the fall (it could be argued for the other way though) of Cyclops. Art is extremely solid, dialogue is fast paced and it continues to show promise of the future of the Marvel Universe. I say it’s worth picking up.