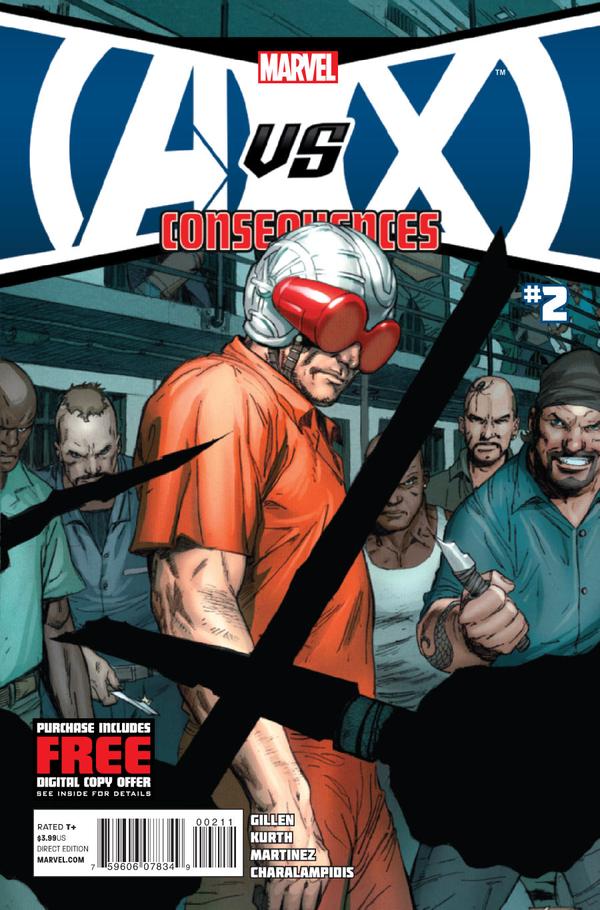 Didn’t I just review issue #1? Either way, Avengers vs X-Men: Consequences continues this week and things are certainly starting to heat up.

The story is simple: Wolverine goes into an interrogation room with a six pack of beer and a head full of questions. Cyclops, a man with literally nothing to lose and is waiting to be the next mutant martyr, has answers but refuses to give them up. What do they do? Talk. Simple as that. But between these two, even a simple discussion can be incredibly intense.

Considering the issue is mostly Scott and Logan talking, it had a lot of potential to be boring. But Gillen understands the two’s relationship and past and utilizes it well. They play off each other in a very Joker vs Batman manner, and it was hard not to think of their interrogation scene from “The Dark Knight” while I was reading this issue. The back-and-forth is astounding to watch unfold and their are certain to be some things that people are going to be left talking about. All of that leads to a great cliffhanger and I couldn’t be more excited to see how issue #3 turns out in regards to the future of certain characters.

Steve Kurth handles art duties this time around and it’s a definite improvement from issue #1. While the art wasn’t bad before, it sometimes bordered on cartoony and didn’t really do anything to wow me. This time around Kurth seems to have a better grasp of what’s going on and how to utilize the space well. The issue is mostly just two people talking. It takes a lot of effort to make that dynamic and interesting. The framing of the characters, the angles that Kurth plays with, everything works really well. I’ll be interested to see how art is handled in issue #3. My only concern is Cyclops’s look. He can go from bone-skinny to healthy depending on who’s drawing and there hasn’t really been an established continuity between the looks. That will change in the future hopefully.

Avengers vs X-Men: Consequences #2 is a much stronger issue than its predecessor and really has me excited for what’s to come in this story. If you are a fan of back-and-forth battle of the wits discussions that escalate to a really intense cliffhanger, chances are you are going to love this issue as much as I did. An instant buy in my book.