As I sift through the debris field that is now my home, attempting to restore it to it’s pre-NYCC state, not to mention trying to secure some clear wall-space to hang some of my convention swag (more on that later!), I guess it’s time to put some of my thoughts about this year’s show to paper.

As preface, over the last 30-odd years I have attended many comic conventions, from local events at VFW halls to the “hotel ballroom” shows that were once the norm, as well as larger ones such as the “Big Apple” and “National” cons which were the highlights of past New York convention seasons. Even with this experience (and my cynicism in tow!), nothing could have prepared me for the epic scale of the NYCC; the Artists Alley alone was bigger than any con I had ever been to!

This is where my NYCC adventure began, as I’ve always used the first day of a con to grab my “must-get” items, and following some great advice from our “permanent guest co-host” Rob Neumeyer from Tor Comics, I hit the Artists Alley straight-away on Thursday to ensure freer contact with the creators whom I wished to meet. Plunging right in, on that first night, I purchased a print of the cover to the first Power Girl TPB from the charming Ms. Amanda Conner, and a Zatanna print from Jamal Igle, whose Molly Danger Kickstarter I contributed to, and each of these talented creators will hopefully soon be appearing with us on a future episode of Talking Comics! Scouring the room, I also picked up a wonderfully “cartoony” 5×7 Power Girl drawing from Genevieve of GFT Illustration that complements a set of similar “DC girl power” pieces that I bought at this year’s I-Con. Sadly, even in this “warehouse” of artistic treasures, the two things that I was most hoping to purchase, a Captain Marvel print by either Dexter Soy or Ed McGuiness, or any sort of Fantastic Four art, were nowhere to be found…at least so far!

From there it was off to the Show Floor and it’s cornucopia of riches; but even though I would learn over the week-end that Thursday’s crowd was “light”, it was nearly impossible to move through the aisles as people queued up will-nilly for various signings, premiums and give-aways, and with the “Big Two” publishers (…and Lego, oddly) dominating the center of the room, it became obvious that the only way to make any progress was to take the “Great Circle Route” around the fringes. This strategy paid quick dividends, as I was able to have a nice chat with Thom Zahler, the writer/artist of the wonderful Love & Capes (who was aware of our positive reviews, and is eager to join us for a spot), and to also make my way to the Twomorrows Publishing booth (Alter Ego, Back Issue andthe Modern Masters series—all highly recommended!), where I met Eric Nolen-Weathington, the editor of the up-coming biography of Matt Baker, one of the few African–Americans to work as a featured artist during the Golden Age, and whose story should be quite fascinating, and certain to be a topic on a Talking Comics show nearer to the book’s publication date. It was very heartening to see the large turn-out of actual comic book dealers at the Con, as word out of San Diego has been that dealers have felt left out with that show’s focus on other media, so it was a great chance to see scads of Silver and Golden Age rarities, as well as pay a too-short visit to old friends John and Nan Verzyl of Comic Heaven, who are in the top tier of Golden Age dealers in the world.

Having (mostly) disposed of purchasing, I intended to focus on panels for the remainder of the week-end. The spanner-in-the-works there was that with such a huge turn-out, some panels were completely filled over two hours before they were due to commence, which certainly puts a damper on enjoying the rest of the Con, as you can imagine…not to mention the toll standing in line for that long takes on my tired old legs! I did still manage to catch the Green Lantern talk, and on Sunday, a “Women of Marvel” panel hosted by X-editor Jeanine Schaefer and featuring a raft of female creators and editors, on topics such as diversity and corporate policy, exploitative characters, opportunity for female creators, and exclusion of female readers, all of which re-affirmed my belief that Marvel has a better handle on their heroines than their Distinguished Competiton. This panel continued with one-on-one chats with these talented ladies, as well as the lucky chance to have my picture taken with Captain Marvel herself, in the person of the gracious Judy Stephens, the co-ordinator of the AR content that you see in so many of Marvel’s titles. Thankfully, I had with me a print of the alternate cover to Captain Marvel #5 by Joe Quinones that I had purchased that morning, so as not to look like too much of a lecher! 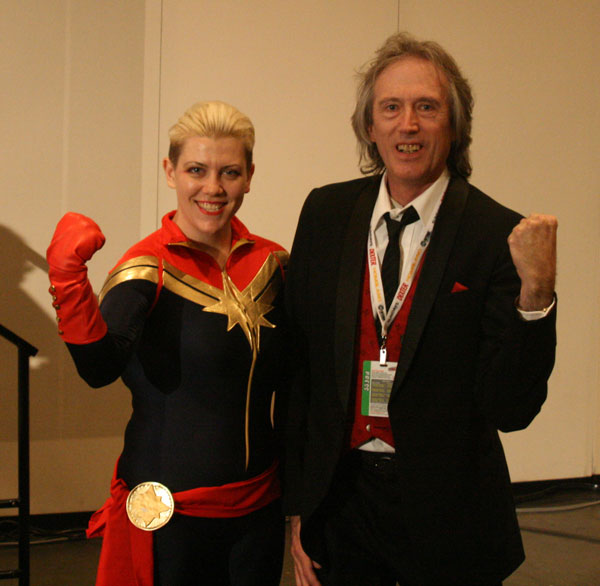 (I’m not sure that it helped, Robert darling. Audrey)

Sunday also found me at the Artists Alley table of Amy Reeder and Brandon Montclare, the artist and writer team behind the marvelous Halloween Eve, which is a must-read for the up-coming holiday, and a book that we are hoping to chat about on Talking Comics with it’s creators in time for All Hallow’s Eve!

For all the panels and purchasing, the heart of any convention is the unique gathering of like-minded people, reveling in each other’s shared passions, and spending time with friends old and new, all while celebrating the many facets of this hobby that we love. My heart-felt salute to all who dared the throngs! On a more personal note, it was my pleasure to meet two of our Talking Comics family in person; Kyle (SuperBadLarry), whom I shared a great, albeit brief conversation with after the “WOM” panel, and Harry Jackson (HSJIII), who also joined Bobby, Steve and myself for an after-con dinner, along with my “converted-from-electronic-to-real life”’ friends, Sarah and Ted Bell (you know her as IamGiantWoman, the creator of our hilarious avatar back-stories!), who came, saw and “con”-quered NYC as an anniversary/birthday gift to each other, and with whom I shared quite a few note-worthy times; some I’ve spoken about, such as the Firefly panel, and her encounter with author Terry Pratchett, but our posh night of $22 cocktails and $15 French fries at New York City’s fabled Algonquin Hotel…well, that I’ll just leave to your imaginations.

(Why am I just hearing about this now, Robert? Audrey)

Finally, I would be a loathsome cur if I did not mention my friends and colleagues at Talking Comics who made all of this possible: Bobby , for his insight and ability to see that we had a place at the table; Steve, for his “We can do this thing!” tenacity; and last, but not least, the disarmingly mad-cap Ms. Stephanie Cooke, whose vivacious personality has me in thrall of her shenanigans! Thanks to you all for allowing me a part in this new adventure!

See you in the funny papers!

This essay was composed whilst listening to Thinking Out Loud, the latest solo album by the virtuoso Thereminist Pamelia Kurstin. The liner notes for this album describe it as “The strangest recording ever made by one of the strangest musical instruments ever created”. How can you not want to listen to that! rrr