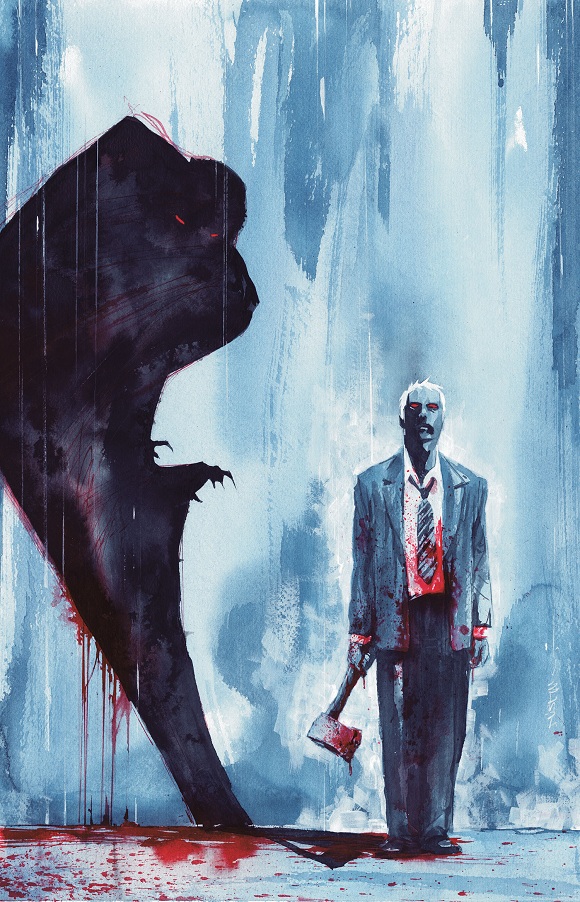 Scott Snyder recently announced that American Vampire is going on hiatus after the conclusion of The Blacklist, and that it would change the status quo of AV as a series. He forgot to mention that Lord of Nightmares #5 would be just as ground shaking.

I’m still trying to process the events of this book. I never thought that these particular characters could evoke such a deep emotional response in me, but damned if they haven’t. Hobbes and his not-so-merry band of misfit vampire hunters are pitted against the “man” himself, Dracula. Snyder has done a fantastic job building up to this point, but I have to say that I’m a little disappointed with the payoff. Dracula is never really seen. So, we still don’t know what he looks like. While I really wanted to see the legendary vampire, I can’t complain too much about what was concocted. It was moving, haunting, and twisted.

Dustin Nguyen’s work was the best of the miniseries in this issue. His sketchy pencils look especially eerie. This is a dark, depressing issue and his ghostly imagery makes the final sequence. It’s disturbing on so many levels, but it’s so beautifully rendered that you can’t help but look. As he has throughout the series, Nguyen is able to nail the action and emotion when needed. I am really pleased that he was on board for this run. He was the perfect artist to pull this off.

I don’t want to say much else. Actually, I can’t say much else without spoiling anything. Snyder puts his heart and soul into American Vampire, and his passion project is ripping the rug out from underneath us. When you read this book, if you are as invested in this series as I am, it will leave you in pieces.