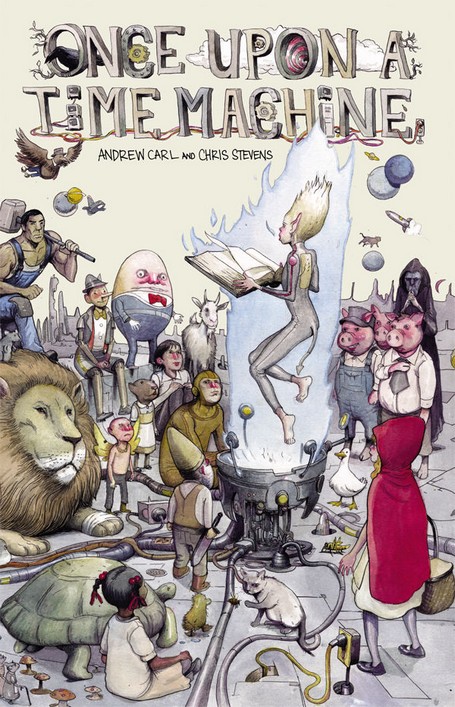 Once Upon A Time Machine is a beast of a collection, with 432 pages and 25 stories. These are all the classic fairy tales, re-imagined in futuristic settings with fitting new characters and events. There are way too many artists and writers involved here to list, all of them very talented and skilled story tellers. It’s considered an ‘age 12’ and up appropriate book, which I agree with. Beyond some light, animated violence, this is a very nice bunch of fun stories that readers of (almost all) ages can enjoy freely.

There is so much greatness contained in this tome, it’s difficult to know where to begin to tell you about it all. I will start by saying every story here is creative, unique and well done. In addition to the stories, there is lots of bonus ‘cover art’ for other stories not written out, but they are so well illustrated you can really appreciate them on their own merits. In the name of time and space (hehe) I will share with you a few of my favorite tales.

One my favorites was Pinocchio or The Stars Are Not Wanted Now, in which Pinocchio is re-written as an all-knowing computer hologram called Unit 3000-21. He is a small, table top projection machine that can answer any question the owner has in the most logical, literal terms. A virtual encyclopedia, if you will. This handy little bot is seen as a saving grace to humans everywhere in the information age, always ready with the right answer, when it’s needed, an interactive catalogue of data and knowledge. As Pinocchio is utilized by everyone from students and teachers to housewives, it becomes clear immediately that the truth is not always what people want to hear. Pinocchio finds himself faced with an internal struggle over fulfilling his top priority, to always offer the truth, and the confusingly human trait of wanting to be liked and to make others feel good. It’s a touching, sincere story that’s very honorable to the original, but with a defined backdrop in the future.

The Three Musketeers is a weird, action packed take on the classic that takes place in a time of mystical warriors and kings. The Three are here represented as a trio of brothers connected through their physical senses. Only one can see, one can hear and one can speak. They rely on each other to survive and battle. Athos, Aramis and Porthos are sent off on a mission to retrieve a royal sceptre before it falls in to the wrong the hands and the treasure is currently being moved on a train, protected by various battle ready opponents. This story is quirky and quite different, the characters slightly creepy but full of personality. And the new version of this old tale doesn’t fail to hold on to the humor of The Three Musketeers.

The Three Little Pigs is another one I really adored. It’s a super cool, highly stylized version that incorporates social media in the future and it’s power to inform the world, corporate schemes and sins and the concept of an Earth on the edge of economical and environmental collapse. Darren Wolf is an investigative journalist and media rock star who has a grand time shooting around space, live feeding his gonzo journalism to his fans and followers. He’s out to expose some very powerful people and reveal just how deep this group of moguls have dug themselves in to their selfish, egotistic lives while ignoring the suffering and needs of Earth’s population. It’s a sharp story, very relateable in modern times and the artwork is particularly fresh.

Verdict: Buy this, or at the very least read it digitally. It’s a giant book stuffed to bursting with great stories told with truly unique characters,  based on classic fables. Every piece presented here is a quality piece of work and will provide hours of whimsical, light hearted reading.