New York Comic Con has officially wrapped up, and most of us are getting back to our normal lives. The weekend provided quite a bit to be excited about, a lot of which involved brand new books.

DC dropped a bombshell on us by giving us a super-team on a Super-book. They also announced that a new book from Keith Giffen, Threshold, will be coming in January. But when there are new additions to DC’s lineup, there is usually not so good news to follow.

With the solicitations for January, out now, came the news of the next round of cancellations. Legion Lost, Grifter, Blue Beetle and Frankenstein: Agent of S.H.A.D.E. will officially end at issue #16. 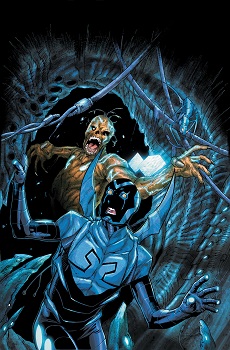 Frankenstein and Blue Beetle have been really strong additions to the New 52, but just didn’t ever sell too particularly well.

DC has been fairly adamant about keeping 52 books in rotation. With the loss of these four books and recently canceled G.I. Combat, DC has some holes to fill. Threshold is set to take one spot come January, and Snyder and Lee’s Superman book will also set to drop in 2013. But that still leaves room for new books to be announced. No word on what they will be, though.

It’s never fun to lose a book that you enjoy. But that does allow for new opportunities. How does this make you feel? What books would you like to see in their stead? Let us know in the comments below!