Some of the folks over at Marvel had a long day today. Along with the “Join the Revolution” panel, which covered Marvels big heroes, there was a panel on all things X-Men too. Editor in Chief Axel Alonso was in attendance along with writers Rick Remender, Jason Aaron, Gerry Duggan, Marjorie Liu, Simon Spurrier, Peter David, and Dennis Hopeless. Senior Editor Nick Lowe and Jeanine Schaefer graced the panel with their presence as well.

To kick things off, it was announced that Stuart Immonen would be joining Brian Michael Bendis on All New X-Men. It was also announced that Dave Marquez (Ulitimate Spider-Man) would be on art duties for issues 6-8. 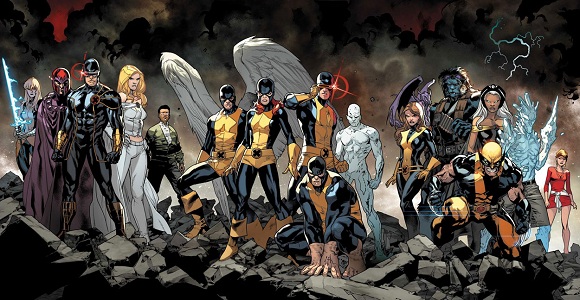 For those who don’t know, All New X-Men will bring the original five X-Men to the present Marvel Universe, and follow them through the fallout of AvX. There was even an early draft of the book present that some lucky fans got to take a peek at.

Jason Aaron’s Wolverine and the X-Men was next on the docket, and Aaron addressed the fans’ reaction to the most recent issue. Many fans were, well, depressed after the issue, but Aaron urged them to stick with it. He also announced that Nick Bradshaw would join the team, along with Ramon Perez in rotation. 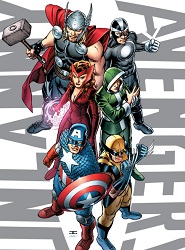 Remender took to the mic next to speak about the book that began Marvel NOW!, Uncanny Avengers. He told the crowd that this book has Professor X’s dream at its heart. “This is Captain America’s attempt to set up and help the mutants. Now that the mutants are back, that’s more important than ever,” Remender said.

It was said that the book’s villain, Red Skull, will be around for a while. It was also brought up that his ideas from X-Force will carry over to this book as well.

The conversation then moved to another completely new title. “We’re taking all the cool badass stories from the 90’s and wrapping it up with one big last score,” Hopless said about his Cable and the X-Force series. It revolves around the one thing Cable wants to do before he retires and builds from there.

Nick Lowe said, “They’re [the X-Force] going to be on the run from the Uncanny Avengers, but in the first arc you have to figure out why they’re on the run.”

The next logical subject to address was Rick Remender’s finale of his highly touted run on Uncanny X-Force, and how Sam Humphries plans on following that up. Remender is wrapping up, and Final Execution is trying to “…match the end of the Dark Angel Saga in terms of scope and [emotion].” 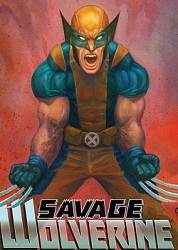 Of course, after Final Execution finishes, Sam Humphries will be starting the series with a brand new #1 slapped on it. His take will see Storm join the group, and focus heavily on Psyloche and how she is able to deal with what she has been through.

“It’s always been about grey area and you’re going to see a lot of fighting between the team members,” Nick Lowe stated.

A book with a new main character came up next. Simon Superior will be focusing on Legion, Professor Xavier’s son, in the new chapter of X-Men Legacy. It’s a tale of Legion trying to find out what to do with his life after his father’s passing.

Wolverine’s cancelation lasted about a week before its successor was announced. Savage Wolverine will feature Frank Cho, but Jeanine Schaefer spoke on his behalf, “It’s going to be a pulpy adventure with some awesome guest stars. At the end it’s going to change something fundamental in the Marvel Universe.” Setting lofty expectations out of the gate with this one I see.

Next is the book that I am most excited about in the X-Men part of Marvel’s world, Deadpool. Gerry Duggan was present to discuss the book that also features Brian Posehn and Tony Moore.

The first arc will be all about Wade fighting zombie presidents. More so, Duggan says FDR will appear in the first issue. He said, “Listen, you can’t have the Avengers fight a guy in a wheelchair.” Some covers shown revealed Deadpool punching Abraham Lincoln and kicking “Tricky Dick” Nixon.

Peter David followed teasing big things for X-Factor. “Issue 245, you’re going to get to a point where you go ‘Wait, what?’ This has ramifications in the next few issues,” says David.

He’s also readying for his The Hell On Earth War story. It’s a six issue arc that ties up threads David has been sewing in the last couple issues of the book. “By the end of The Hell On Earth War, basically every character in the Marvel Universe is going to be gunning for X-Factor.” 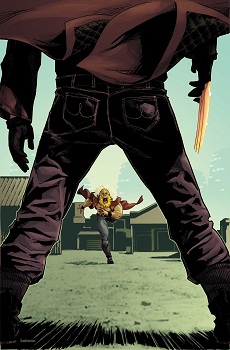 We learned that Marjorie Liu will have Astonishing X-Men follow Warbird. In the series we will learn the reason why she is the art teacher at the Jean Grey School.

Next to the stage was Daniel Ketchum. He talked about Gambit, by James Asmus. “In the coming yaer, it’s a lot of romancing ladies, it’s a lot of running up against monsters,” Ketchum said. “Also, a lot of shirtless Remy Lebeau.”

The final book they discussed before opening things up to questions was Greg Pak’s X-Treme X-Men. Again, Schaefer spoke in place of the creative team. It follows Dazzler and her team of alternate-reality X-Men.

Schaefer also told the crowd that Hercules and a different reality’s X-Force would make a guest spot in the coming issues. “In the 7.1 issue, we see Brood come back to the 616 Universe and getting into some scraps there,” Schaefer said.

Well, there you have it, the entire low down on the goings on with any relation to the X-Men. Marvel NOW! is coming and there are huge things in store for the mutants of the 616. Sound off in the comments below!