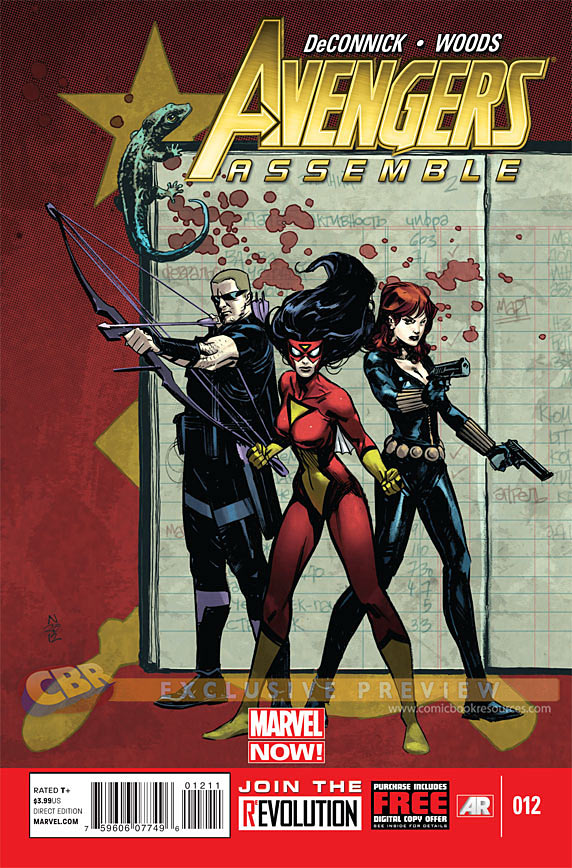 It was announced back in August that Kelly Sue DeConnick, the author behind the fantastic Captain Marvel ongoing (among other things), would be taking over for Brian Michael Bendis on Avengers Assemble, starting with issue #9. At NYCC during the “Marvel NOW! The Avengers” panel, it was announced, among other things, that the second arc of DeConnick’s run would be called “The Widow’s Ledger.”

Focusing on Black Widow and featuring Hawkeye and Spider-Woman, DeConnick wants to bring a personal approach to Black Widow, dealing with her dark past while also making good on some debts.

“I think Natasha is a terribly broken human being. Not broken like a train wreck, broken like — cold; Ice cold. I don’t think she lets herself feel much of anything; certainly not very deeply. Feelings affect the mission, you know? I think Natasha is constantly calculating — the concept of the ledger for her — whether it’s literal or figurative, it’s brilliant. She’s forever calculating her next move, her mistakes, her wins and her debts. I don’t think she regrets her past, but I do think she has calculated atonements to make. As far as her own free will — I expect everyone has a different take on this. My Natasha takes responsibility for all of her actions as choices. She just doesn’t allow herself the messy human behavior of wringing her hands and second guessing everything. What’s done is done; it is what it is. You own it, make good where it’s owed and move on. Period.” DeConnick said in an interview with CBR.

But Natasha isn’t going into this alone. She also has her “work husband” Hawkeye and Spider-Woman along to help and just the three of them together will prove to be interesting.

“I think they’re important to each other [Black Widow and Hawkeye], but I don’t actually give it more or deeper meaning than Clint’s relationship with Bobbi or Jessica. In the context of this story, they’re more connected by the event in Natasha’s past than their previous romantic entanglement. That’s a factor that probably means more to Jessica than it does Clint or Natasha. I’m just speculating here. [For Spider-Woman] It’s hell on earth. Third wheel, between the impossible-to-read boyfriend and his work wife? Hell. On. Earth. And yet, Jessica will find a way to make it work.”

Between spies, unpaid debts and a romantic triangle, this is certainly going to be an interesting arc to say the least. Ultimately though, DeConnick wants to create something that people will enjoy.

“Ultimately what do I want to do with this book? The same thing I want to do with any book. I’m genuinely afraid of articulating it for you because there’s no way of saying it that doesn’t sound — depending on your perspective — either pretentious, naive or grandiose. Possibly all three. But here we go: I want to write stories with characters I care about in such a way that offers some genuine surprises and moments of authentic emotional connection. Four color operas, minus the score. Now, I’m not saying I’m successful; I’m saying that’s the goal. Also: fun. I want to have the fun.”

Kelly Sue DeConnick takes over Avengers Assemble with issue #9 in November. “The Widow’s Ledger” will begin in February.