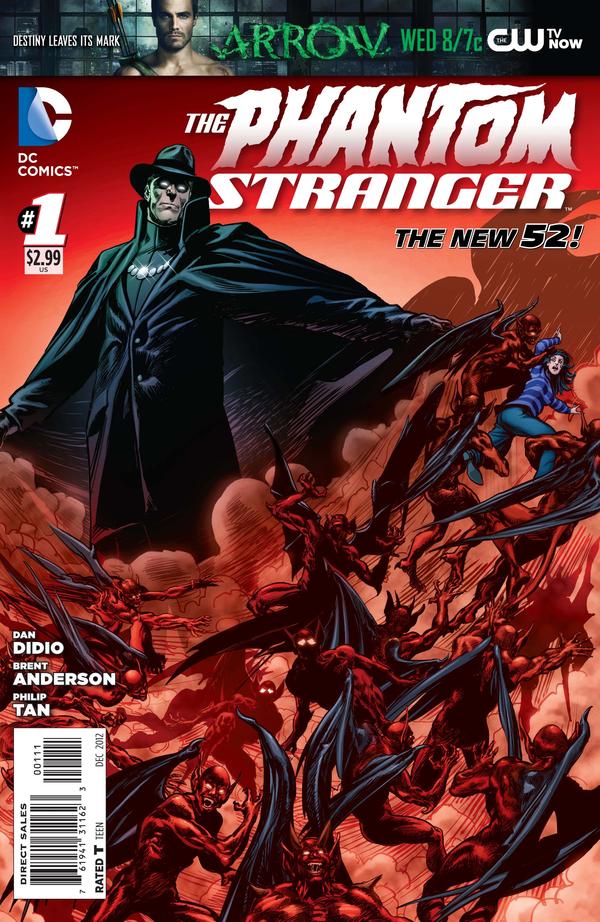 The Phantom Stranger is a book that I’ve had mixed feelings on since I read the zero issue last month. Dan Didio wrote a solid story, introducing us to a man who’s tasked with walking the Earth paying off his debt one coin at a time, but it seemed to lack direction. The Stranger is given this task, but it was so vague and hard to understand the who and whats that ultimately I was left wanting more. With issue #1, Didio starts to give a more clear direction for the series, while also acting as an introduction to two soon-to-be major players in the DCU.

The story picks up some time after the zero issue and focuses on the Stranger meeting a girl with empathetic powers named Rachel. She can absorb the pain and sorrow from others and use it to bend things to her will. The only issue is that her father Trigon, a powerful demon from Azarath, is after her and about to launch his army in order to bring her back home. Rachel doesn’t want to go home, as she fears that Trigon will abuse her powers to destroy the Earth, but The Stranger and Trigon’s Church of Blood have other ideas.

If you couldn’t guess by the description, Rachel is also known as Raven, most famously a member of the Teen Titans. Whether this is a backdoor pilot into her joining the Titans (more likely getting her own series), or just a cameo to appease fans who were wondering where the beloved Titan went, time will only tell. But the introduction of these two characters, as well as a cameo from another mysterious character at the end, is a refreshing change of pace in the DCU. While the motives of the Stranger are still foggy at best, and some of his dialogue is on the hammy side, Didio writes a solid story that leaves me wanting more, in a good way.

The art is certainly going to be divisive between fans. The art is a substantial improvement from the zero issue, partially in part due to Phillip Tan’s inclusion no doubt, but it definitely still feels old-school. The new redesign of Raven and Trigon is certainly a welcome surprise (especially Trigon) and the Stranger looks much improved, but some of the backgrounds and general design still feel muddy and grainy. Part of that is obviously a stylistic choice on Anderson’s part, but for those who aren’t used to his art style it might be jarring on first glance. As a fan of Anderson’s style I’m fine with most of the art in the book, but it could certainly be a turn-off for some.

The Phantom Stranger #1 is a solid book that has improved on all front’s from the previous issue. The story is more cohesive, albeit still confusing at times, and the introduction of Raven and Trigon is certainly one that I’ll be talking about for a while. The art is still going to be a point of dissension for a lot of people, but it’s definitely a step up.  If you like dark and mystical books then I’d suggest giving it a look. I’m interested to see where it goes.