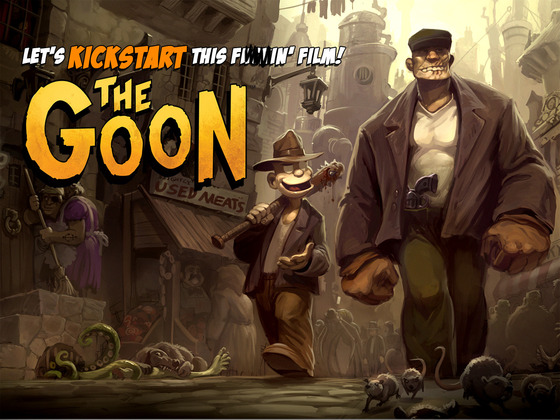 One of my favorite comics being put out every month is Eric Powell’s masterpiece “The Goon.” For years now people have been clamoring for a movie adaptation and finally we might get an answer to our prayers…at the right price. At SDCC two years ago, they showed a proof-of-concept trailer for an animated Goon movie and people went crazy. Now they’ve teamed up with Blur Studios, Dark Horse Entertainment and “Fight Club” director David Fincher, alongside Clancy Brown and Paul Giamatti (playing The Goon and Franky respectively) to bring The Goon Movie to life. But movies aren’t cheap and a lot of studios either don’t have or don’t want to put the money into a project like this and that’s why the team has turned to Kickstarter.

Kickstarter has been giving people and studios a reason to believe ever since the Double Fine project became one of the most talked about stories of the year. Since then, different film companies, video game companies and comic book writers/artists have been turning to Kickstarter to fund their projects, all with the help of dedicated fans who want to see them succeed. But it’s never easy, and for The Goon it’s an uphill battle. They need 400,000 dollars in, as I’m writing this, 29 days. So far they have raised almost 60,000 dollars but they’ll need all the help they can get.

I’ll leave you with two things: First a quote from David Fincher on The Goon movie adaptation-

“I admit it—I came to this party late. Chinatown, and the Mystery of Mr. Wicker was—regrettably—my introduction to The Goon and the incredible world created by Eric Powell. I thank Tim Miller—who snapped me out of my Goonless existence when I was looking for material to possibly make into an animated feature, and he suggested I peruse a copy he had (suspiciously) nearby. Of course I marveled at the characters and was smitten with the mise-en-scene, but it was the language—that uncategorizable: Dead End Kids Meets Abbot and Costello Meet the Mummies—that unlikely Powellian patois that absolutely hooked me. If this is your first time, you are in for a treat—if not, you already know how lucky you are.”

Secondly, the now famous proof-of-concept trailer that has been making the rounds online. Hopefully it will inspire you to believe in this project as much as I do, but if not it’ll at least be an awesome trailer introducing you to a great idea.