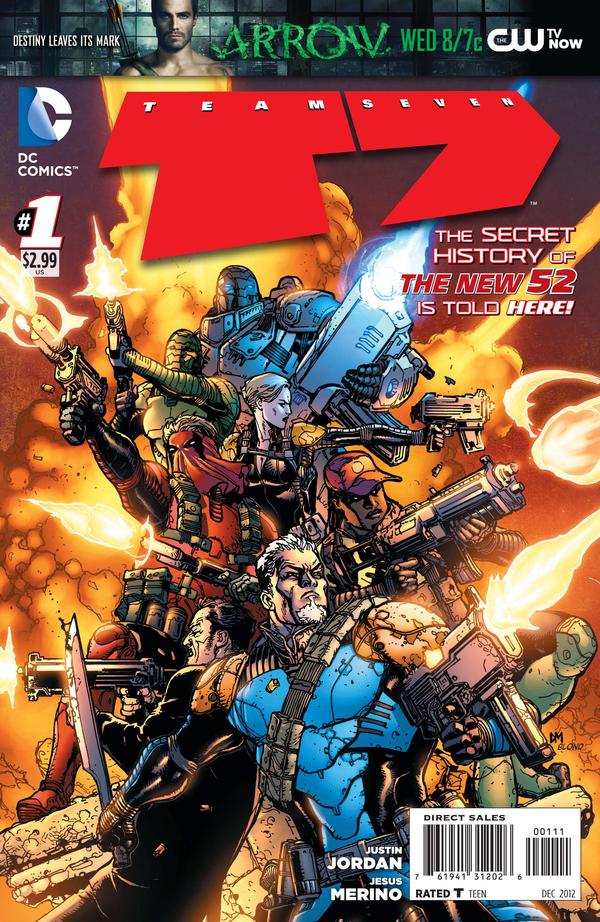 Team 7 #0, one of the four new titles introduced in DC’s Third Wave, was a flawed but promising title that would fill the void of action comic fans looking for something new. Featuring an all-star cast of DC anti-heroes and taking place during the beginning of the new DCU, Luther Strode author Justin Jordan and artist Jesus Merino are determined to give us an Oceans 11 meets Snatch-eque story that will hopefully lead up to the highly explosive fallout of Team 7 established in other #0 titles. Now that they’ve introduced all the heroes, showed why they are important to the team and brought them all together, issue #1 is sending the team out on their first mission. So how does it go? Rocky to say the least.

Lynch, the brainchild behind Team 7, has sent out the team to check on The Float, a sky prison designed to hold super-beings and keep them from further harming the general public. The problem is The Float hasn’t responded in twelve hours and it’s possible that there was a prison break or some sort of disaster that killed all of the normal people inside. While the super-beings themselves can’t escape, it’s imperative that they regain control over the prison. If nothing else this is a test for Team 7 to see how they work together. Needless to say the inflated egos of most of the team are going to cause some serious problems if they don’t learn to keep them in check.

While Jordan still takes time to re-introduce us to the characters and what their strengths and weaknesses are, it’s done in a way that doesn’t feel as clunky and wordy as it did in the previous issue. We see more action then words and for a title like this, it’s important it stays that way. Some characters get more development than others, Dinah Drake (Black Canary) and Cole Cash (Grifter) are two that come to mind, but each character gets to show off some skill they bring to the table. While the end gets darker and more serious, the book is generally lighthearted and fun, reminding me of the films that this title seems to borrow a lot from.

Jesus Merino’s art is bright, detailed and colorful and shows a major increase in quality from the zero issue. It’s not that the zero issue had bad art, but now that we’re getting into the meat of what makes this book what it is, it allows Merino to play with colors, designs and give it a big, bombastic action feel. There are some issues with the backgrounds looking a little too similar in most of the panels, but the characters are usually always at the forefront and most of the characters are well designed. I’m still not sold on some of the characters costumes, but they’ll probably grow on me in time.

If you are looking for a big, exciting, action comic with a ton of flair, then Team 7 is the book for you. It may not have the deepest, most thought-provoking story but it’s simple, funny and entertaining. For action fans like me it’s a solid read and worth your 3 dollars. I’m interested to see where the current arc goes, and the aforementioned blow-up of Team 7 in the near future still intrigues me, so pick this up if it is your kind of book.