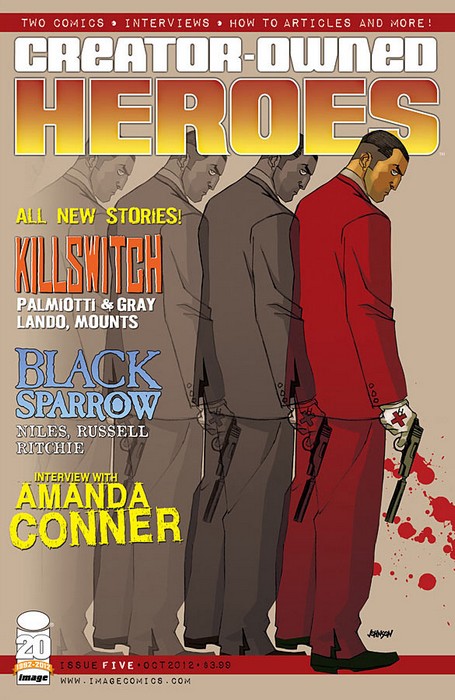 The latest content packed Creator-Owned Heroes hit shelves this week with two brand new stories and several articles pointed at helping creators polish their work and sell it. This series hasn’t failed yet on delivering more information and entertainment than any other comic book being published right now, in fact you could more accurately describe it as a magazine. The focus, as should be clear by the title, is creators. Although all of the interviews are well written and full of detailed advice on making it in the comics industry, as a reader (not a creator) I do sometimes find myself less interested in them and skimming through. That being said, Creator-Owned Heroes always offers more than enough great story material to keep me engaged and flipping pages.

First up is Killswitch, created by Jimmy Palmiotti, Justin Gray, Jerry Lando and Paul Mounts. Killswitch is a talented, almost merciless, playboy assassin. He’s got the skills of a well seasoned killer, but his weakness is women and he will put in as much energy to saving one who grabs his interest as he puts in to murdering his mark. This story hits the ground (or sky) running and doesn’t pause for long. A straight up Bond type adventure like this isn’t usually my cup of tea, but this one moves along so swiftly, I never got the chance lose interest in it. It’s well done, the art works.  I need another dose to see if it really takes me anywhere further, but as an introduction, it’s not a bad dance.

Then, we’ve got Black Sparrow, created by Steve Niles, Jay Russel and Andrew Ritchie. A western tale of a family dealing with the realization that one of theirs is a hated killer, this story is much more my preference as far as material goes so naturally it was the one I related to most. We’re introduced to the family via a melancholy scene of mom, dad and child gathered in front of their dusty prairie home as a wagon rolls up. The family’s elder son’s body is deposited unceremoniously by a neighbor and an ugly dialogue makes it clear that the people of this town are not shedding tears over the man’s death. The dead man’s father tries to honor his son with a proper burial, but adds a morbid and creepy touch to it that foretells trouble to come. This story is touching, spooky and the art is barren, much like the family property it takes place on. I’m looking forward to seeing where Black Sparrow goes, most likely in to dark territory perfect for Halloween season reading.

Creator-Owned Heroes #5 is rounded out with an extensive interview with artist Amanda Conner, questions about comics creation from Jimmy Palmiotti’s Twitter followers, an article from Steve Niles about the screen writing process for comics, and an insider look at the roles of the colorist, artist and writer in the creation process by Justin Gray. These are all well done articles, but like I said, definitely directed at the creator more than the comics reader.

A sneak preview of Retrovirus, an upcoming story from Justin Gray and Jimmy Palmiotti looks promising and fun. It seems to be a plot centered around the discovering of virus components via a frozen Neanderthal by a team of carefully selected scientists hidden out in a highly protected facility.

Verdict: Buy it. You should have already been buying previous issues of Creator-Owned Heroes, because I told you to. You will not get a comic book right now that offers more bang for the buck material in one publication. If you are a creator and you’re not reading these, you’re missing out on tons of great advice and information that could very well help you get where you want to go in your career. As a casual reader, Creator-Owned Heroes provides so many options for stories that appeal to different tastes.