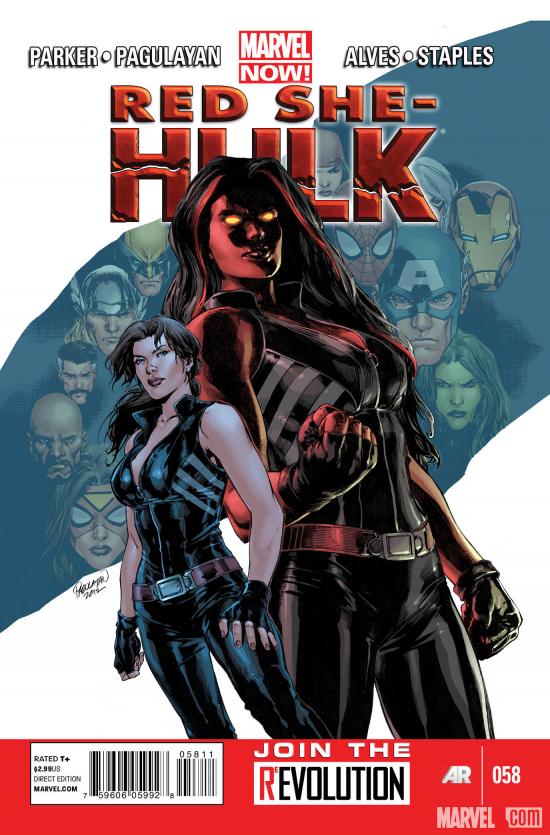 This is my first Hulk-related book. I have avoided the Hulk like the plague, tolerating only in small doses in team books. She-Hulk was on the fringes of my personal Marvel Universe, and Red She-Hulk was off the radar.

While Red She-Hulk #58 didn’t shock and awe me, it has gained my respect. To be honest, the only reason I picked up the issue in the first place is because it’s a female-lead Marvel book. Yeah, I’m that kind of comic book reader. I am excited to see how this character will carry a series. The first issue contains a lot of fighting and brawling on Betty’s part, not so much character development or plot outside of action.

Don’t get me wrong. I love a strong woman who isn’t afraid to beat up people to get what she wants. I was just a little wary about the lack of depth in this issue. One issue, so I’m not seeing this as a big deal.

Betty has a reputation as a non-lethal Hulk, but that reputation is at stake when she goes after the people involved in the Echelon program. This program has super-soldier overtones. We all know messing with DNA and super-abilities doesn’t go over well with the heroes. Overall, not an overwhelming first issue, but it certainly has it’s potential.

Meh. Buy. The more you support and read female-lead series, the more we get. And I want to see more strong women like Red She-Hulk in my pull list.