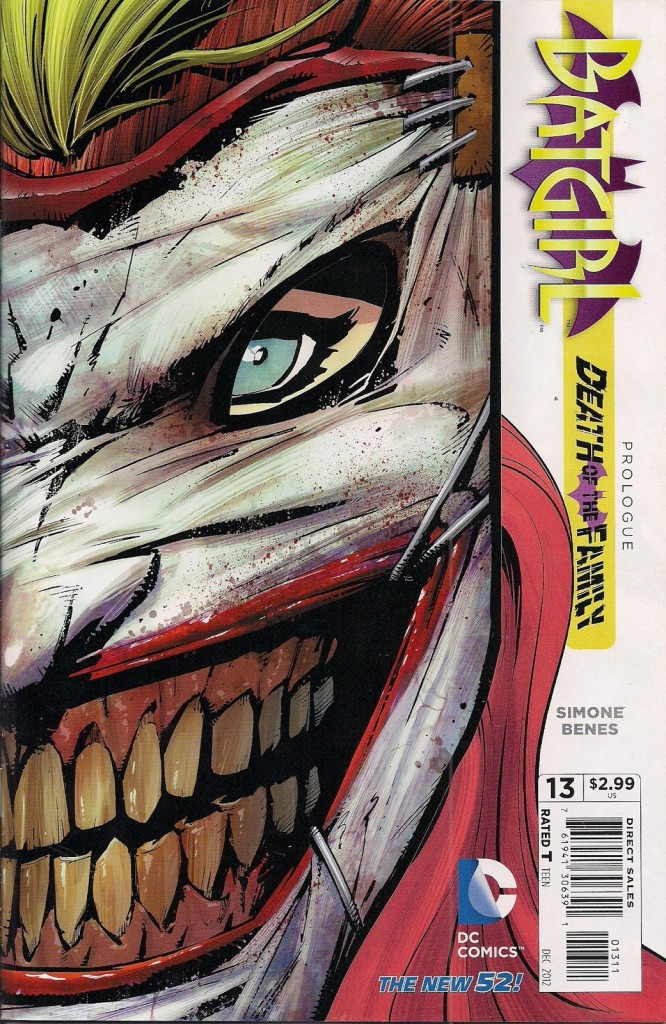 I have a bad habit of telling people all about a comic book after I finish it. Usually the people I relay a story to are those who are not comic fans, and my enthusiasm is met with sighs and eye rolls.

The Death of the Family event is like none other. It pairs DC’s most horrific villain with a fantastic writing team. With Snyder at the helm, Gotham is in for the worst nightmare ever. When I tell people about this crossover event, even the non-comic book fans start expressing concern and curiosity.

Batgirl #13 kicks off the Death of the Family event slowly. As a prologue, it aims to set the stage for the return of Joker. Batgirl is in a battle for her life with Knightfall, and it doesn’t look good. She is suffering from a knife wound. She is desperate to survive, desperate to rescue the two men in limbo.

The context of this fight works better if you keep the Joker in mind while reading. Barbara works harder than any other Bat to do her job. She suffered psychologically as well as physically, but she’s stronger for it. That’s the stakes this issue sets up: Joker is Barbara’s weakness, her personal hell, and he has the power to bring her down. Barbara overcomes a difficult struggle with Knightfall and sees it as part of her job, which emphasizes the damage the Joker can do to her. The Killing Joke is alive and well in this issue.

One more thing…the cover is fantastic. Don’t look too closely, though. It may creep you out.

C’mon. You have to buy this issue. Pick up Batman #13 while you’re at it and get a better understanding of the Joker’s return.