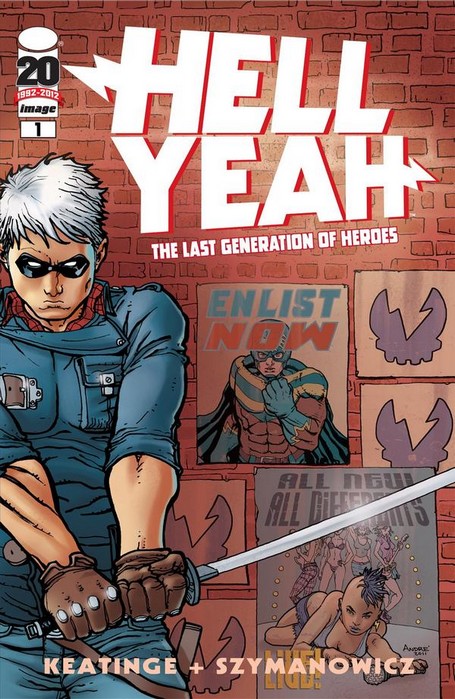 Ben Day is a stubborn punk who has convinced himself that he’s just a regular guy in a world occupied by super heroes. His father is a famous war hero accredited with bringing the super hero to the masses. Ben is reminded constantly of his dad’s accomplishments and he rebels against the idea that he should follow in those foot steps. He starts to question some of the weird things in his own life that don’t seem to have viable answers, like a bar code tattoo on the back of his neck.

It’s all pretty low key, every day stuff until the day when a hole mysteriously blows through his school and 3 super powered strangers emerge from the dust and smoke. From that moment, Ben and his best friend Sara are catapulted in to a confusing roller coaster ride of danger, duplicates from other universes, secrets revealed and murder. Illegal multiverse travel is happening daily and it all seems to revolve around super humans on a mission to murder Ben. All of the Bens. Things get messy, emotional and bloody.

This story is lots of fun, packed with action and new, interesting characters showing up every few pages. It’s a bit of a Watchmen type story, in that it attempts to connect the world of super heroes with reality and expose some of the flaws that come with  possessing super human powers. There is an underlying family struggle happening here as well which lends an intimate feeling to the book, although never taking away from the dirty battles that are imperative to keeping things exciting. I’m not going to say the artwork was quite as exciting, but it’s not bad. I think one thing that bugged me a little about it was that the faces all seem a bit too similar, even the hair of two female characters at times made it unclear which one was being portrayed. Not a big deal at all, but just something that could have been better.

Verdict: I really enjoyed this book and I’m not easily grabbed by super hero stories. The plot is thick and layered, promising more to come, so I will definitely be watching out for Vol. 2 to see where this story goes. I say buy it, as it does seem to hit a unique place among the hero genre that hasn’t been touched on much. Bloody fights, sexy, strong ladies, drama and time travel is a nice package and it’s very neatly wrapped in Hell Yeah Vol. 1.