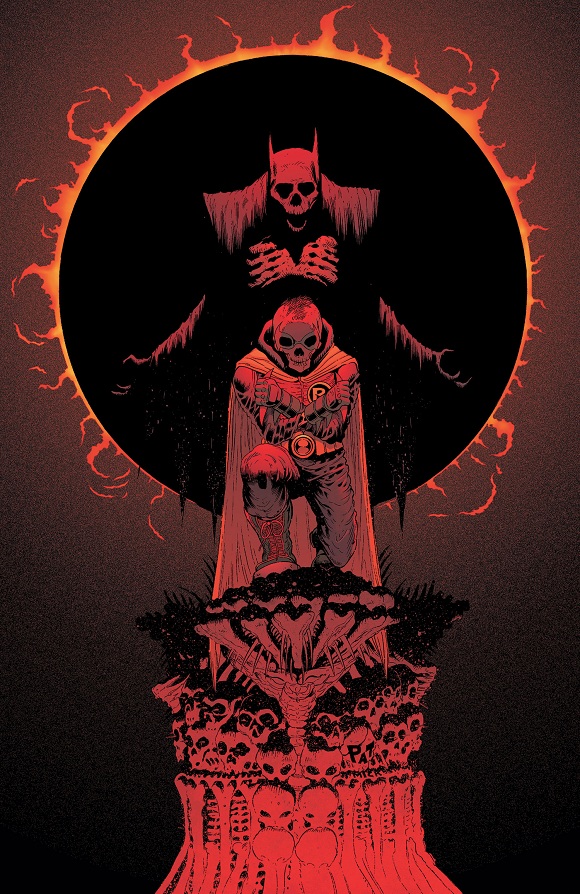 Through the first ten, or so, pages of this book I could not have been more pleased with how things were going. It seemed to be a return to form for Tomasi, after taking a detour through the incredibly mediocre story that we got in the last arc. Then things started falling apart, and quickly.

Batman and Robin is a book that is supposed to focus on Bruce and Damian’s relationship. How is Damian coping with a terrible parent? How is Bruce dealing with a sociopathic killer for a child? How many more animals will Alfred have to take care of because Bruce doesn’t know that you can’t buy kid’s love? All are very important questions in the growing relationship between Batman and son.  There are fantastic moments littering the first half of this book in this regard. So many touching, heartfelt, make you wish your dad was a billionaire, philanthropist, playboy vigilante scenes that it completely washed away the bad taste of Terminus.

Then things got weird. Not “another Batman villain” kind of weird, like “they’re going to fight zombies” weird. Any momentum this book was picking up was railroaded by the turn of events. It went from a story of father and son, to a Romero movie. Along with the abrupt change in plot, there is a drastic change in art too.

Gleason has done fantastic work despite the quality of the story in Batman and Robin, and that does not change in this book. But the change from Gleason’s work to Giorello’s is very abrupt. There is no gradual shift in style, it is immediate and in your face. It completely took me out of the moment. While I’m reading a book, I don’t want to think about why something looks so different. I don’t want to be so put off by such a drastic change of pace that I have to go back to the credits page to figure out just what in the world is going on.  While Giorello’s work isn’t bad, it was just such a shock that it threw me off, and I really couldn’t get back into the book.

I really don’t care about continuity, so long as it doesn’t affect the story. Batman and Robin #13 is meant to be read after Batman #13 and Batman Incorporated #1. I know this because it is purposefully brought up that the Joker is back, and there is a bounty on Robin’s head. This is fine, but when you weave your own story around what other people are doing, you’re setting yourself up to play in their sandbox. So, as readers we are supposed to believe that Batman has the time in his day to deal with the Joker, try and bring down Leviathan, and fight zombies all in the same time period? I know Batman is more of a man than I can ever dream of being, but that is putting a lot on one dude’s plate. It’s not that big a deal, and it doesn’t affect how I feel about the book. But it is something that I chuckled about after I put the book down and processed the situation.

Batman and Robin #13 would be a stone-cold lock of a  buy– if it were just the first 10 to 12 pages. But it’s not, and it all depends on just how crazy you want you’re Bat-books to be. With Death of the Family encroaching on all of Gotham’s books soon, I will certainly stick around to see Damian vs. Joker Round 2.