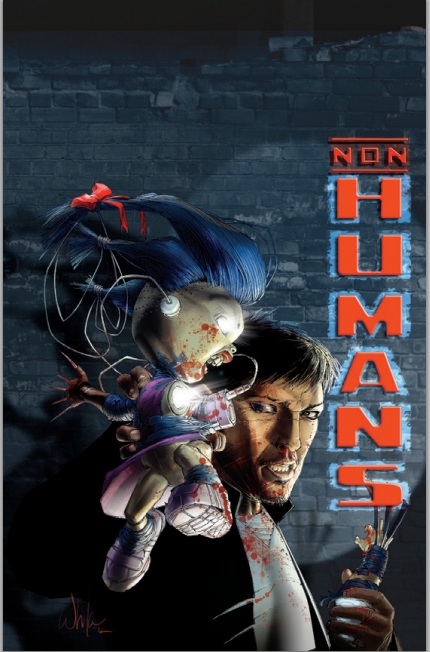 Detective Oliver Aimes of the L.A.P.D. works a rough beat in 2014 and seems to carry enough bitterness and ego to feed an entire ‘weathered cop’ stereotype pool. In his world, crimes are not only a human problem but a Non-Human problem. Non-Human is the term given to toys, mannequins and all manner of man made beings that come to life, instantly developing personalities and language abilities. Apparently these non-humans are created and fed by our imaginations, the only way to prevent the birth of more Non-Humans being to drug children with a mind dampening chemical to keep them from using their imaginations. The Non-Humans are self aware and multiplying fast, forming neighborhoods like ‘Plastic Town’ and activist groups to try and gain the same rights and respect that humans offer each other.

Detective Aimes is hunting a serial killer of humans, and aggressively reminds his fellow officers that the safety of humans is his priority, despite a Non-Human officer trying hard to win his help in investigating murders of Non-Humans that appear to have some connection. Seems Aimes has some personal issues with the Non-Humans which he openly expresses in multiple ways throughout this issue.

I went in to Non-Humans thinking it might be sort of Hack/Slash type creepy doll violence stuff. That’s what I was hoping for, anyway. There are several things that turned me off about this book, not the least of which is the main character, Detective Aimes. As I hinted at, he is a boring bundle of cop stereotypes: angry, discriminatory, violent, bitter, a bad dad, detached and misogynistic. Maybe in later issues he’ll show some softness that will make him less unlikable, but for now, not so much. I found the story behind the Non-Humans ‘births’ and development ridiculous and convoluted. I mean, all it takes is a kid to stop taking his meds, use a little imagination and then his action figure starts talking and asking questions? Not to mention the fist thing a newborn Non-Human needs is it’s eyes poked out so it can see properly. The last critique I’m going to say is the writing left me feeling less than impressed, let alone interested enough to read more. Prime example is this line from a murderous villain: “How about if the assassin and your serial killer are the same friggin’ dude? That a kick in the head, or what?” Ugh.

Verdict: Skip it. I don’t say this often, but if the first issue of a new series leaves me feeling so disappointed, there’s no way I’m going back for more. Yes, sometimes it takes more than one issue to expand on a story properly, but the story behind Non-Humans is played out well enough here to get the gist of it and it’s just not that good. The art is passable but not exciting. The characters are just silly and predictable.