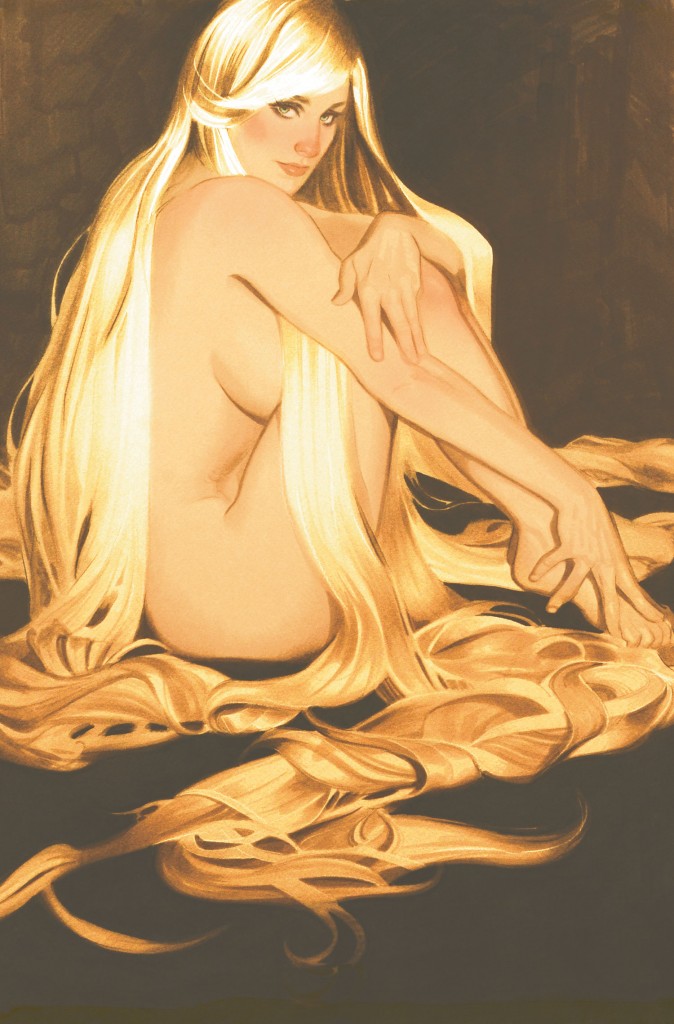 One of the greatest benefits to the structure of the new Fairest series is its ability to mold to any one character and tell a story. From the first two arcs, we already know that Fairest is a vessel for storytelling of all eras and genres. The only requirement is that it involves one of the unique women from the Fables universe.

After our journey with Briar Rose, the Snow Queen, and Beauty, we move on to modern day New York and catch up with Rapunzel. We start with a brief look into Rapunzel’s life as she struggles to hide her fable nature. Multiple haircuts a day, keeping emotions in check, and monitoring how long she stays in one place are crucial to masking her hair growth. Her life is turned upside down when a flock of magical paper cranes attack her and her hairdresser, Joel. The message they bring, in Kanji characters, mention her children.

Her mother, Frau Totenkinder, agrees to help Rapunzel get to Japan. Her help comes with a price, of course. In return for a magical item to slow hair growth, Frau asks for the artifact that keeps the magical beings in Japan hidden. She and Rapunzel suspect that the Fables from the Hidden Kingdom are up to something.

Meanwhile, our boy Jack (as in “and the beanstalk”) is in his usual trouble, tricking power people out of their money and making off like it’s no big deal. When he learns Rapunzel and Joel are off to Japan, he decides to help them obtain passports and tickets for the price of tagging along. Once in Japan, we begin to realize the magnitude of Rapunzel’s situation.

Beukes has done a fantastic job setting up this story. There is an air of mystery woven throughout, as well curiosity about Rapunzel’s tie to Japan and her children. For an introductory issue to a new arc, it sure gets the job done.

And the cover! Can Adam Hughes do no wrong?

It’s a buy, especially for people interested in the Fables universe. Issue 8 does a great job explaining the roles the different fables have, and the issue itself takes place a few years before the first issue of the main Fables title (Rose and Jack are still together in this issue!). The story is well written, and the artwork is done beautifully.