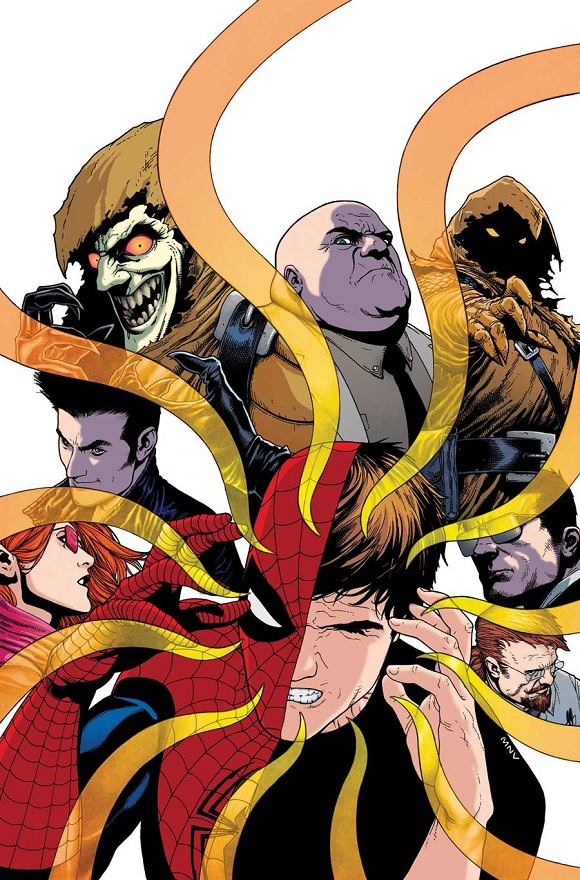 This is more like it. Coming off an arc that was underwhelming in most respects, Amazing Spider-Man #695 feels like it is setting up for one epic issue that may being coming in, oh say, 5 issues. I believe there is something big planned coming up around then.

Dan Slott and Cristos Gage have finally brought us back to threads he threw out there in No Turning Back. Kingpin is out to get Spidey, and he’s using the Hobgoblin as his right hand man. While this is my first encounter with Hobgoblin in anything but the old animated series, I was not one bit put out. Marvel’s nifty little “catch up on everything you need to know before you dive headfirst into something you probably won’t know too much about” page definitely did its job. A quick read on the wiki’s to figure just who these people are in a little more detail, and boom, I’m right there with you guys. DC could have saved us a month of railroading their stories by “borrowing” an idea here.

Other than the two main baddies running about this issue, there are background threats that I’m sure will come to the forefront in the coming issues. You have the original Hobgoblin planning to take his mantel back, which could actually benefit Spidey, and Madame Web is losing her mind. She’s seeing things, more than usual this time, and what she is seeing is big picture kind of stuff–world changing stuff, perhaps? It’s incredible how different this arc feels than the last. It already is has a far better pace and it’s only one issue. This is the kind of storytelling that Slott sold me on early in his run, and I can only hope that it keeps up.

Spider-Man has his hands full throughout the issue, and it’s beautiful to look at. Giuseppe Camunocoli’s work is amazing. It’s a big change from Humberto Ramos’s work we got in the previous arc, but it is special. It mixes what Ramos was able to do so well in the action sequences, and applies a more realistic, darker style. His artwork fits the tone of what Slott is setting up in this arc. While Ramos was great for Alpha’s arc, this seems far more serious and twisted. For the first time since Spider Island, I genuinely can’t wait for the next issue. That may be because the little arrows littering the page that tell Peter everything around him that could kill him, is hilarious. But, you know, the book is good too.

This book was on the verge of being dropped after the lack luster, last few arcs, but this is what I have been waiting for. This is how you set up a story. This is how you catch a reader. If you haven’t been reading, now is the perfect time to jump on. Please, do so and join us in the giddy approach to #700.