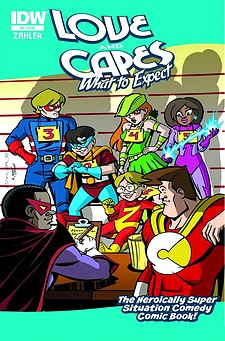 Love and Capes: What to Expect #3

Love and Capes: What to Expect #3 stays true to the previous issues in the mini-series by providing a parody, slice-of-life look to the makings of a superfamily. Abby, still in her first trimester, is beginning to worry significantly about her pregnancy, Darkblade and Amazonia are forced to make adjustments, and the Crusader must work with his wife and friends to help them deal with the major life changers.

Darkblade and Amazonia took a leap and moved in together. However, Darkblade works nights and Amazonia works days. This type of schedule puts a strain on any relationship, no matter the people involved. The Crusader suggests Darkblade takes on a sidekick (or intern, as Darkblade prefers to call the position). On top of his daily responsibilities as a detective and superhero, Darkblade begins to face his own mortality as he discovers that all good things must come to an end.

In the meantime, Abby and Mark attend an ultrasound to check on the health of the baby. They decide to keep the sex of the child unknown, and Mark agrees to take a potion to prevent him from using his x-ray powers to see the baby. While he promises that he would never do such a thing, Mark realizes it would make Abby feel better if he removed that kind of temptation and embraced the sense of the unknown. The way the couple handles this issue is admirable; Abby acknowledges that the temptation is a very real thing, and Mark agrees to Abby’s requests in order to validate her feelings about the issue as a whole.

Probably the funniest/scariest moment of this issue is when women start sharing childbirth stories with Abby. Thirty-two hour labor, umbilical cords wrapped around necks, enlarged heads…these are things that new mothers do not want to hear, especially when they are carrying a potentially superbaby. Abby’s fears are relieved by a little maneuvering on Mark’s part and the input from a very wise, sweet mother.

While Love and Capes: What to Expect is not a complicated story, it is well written and hilarious. References to a British man with a fez, cross-overs, reboots, and more are sprinkled in this issue, reminding us that comic books are meant to be fun and enjoyable. The colorful character design and quick jokes make Love and Capes: What to Expect a comic series worth checking out.

We are only three issues into this series, which means you can pick up this issue of Love and Capes: What to Expect and still understand what’s going on. You’ll understand the superhero stereotypes, the jokes, and catch on quickly who’s who in this series.