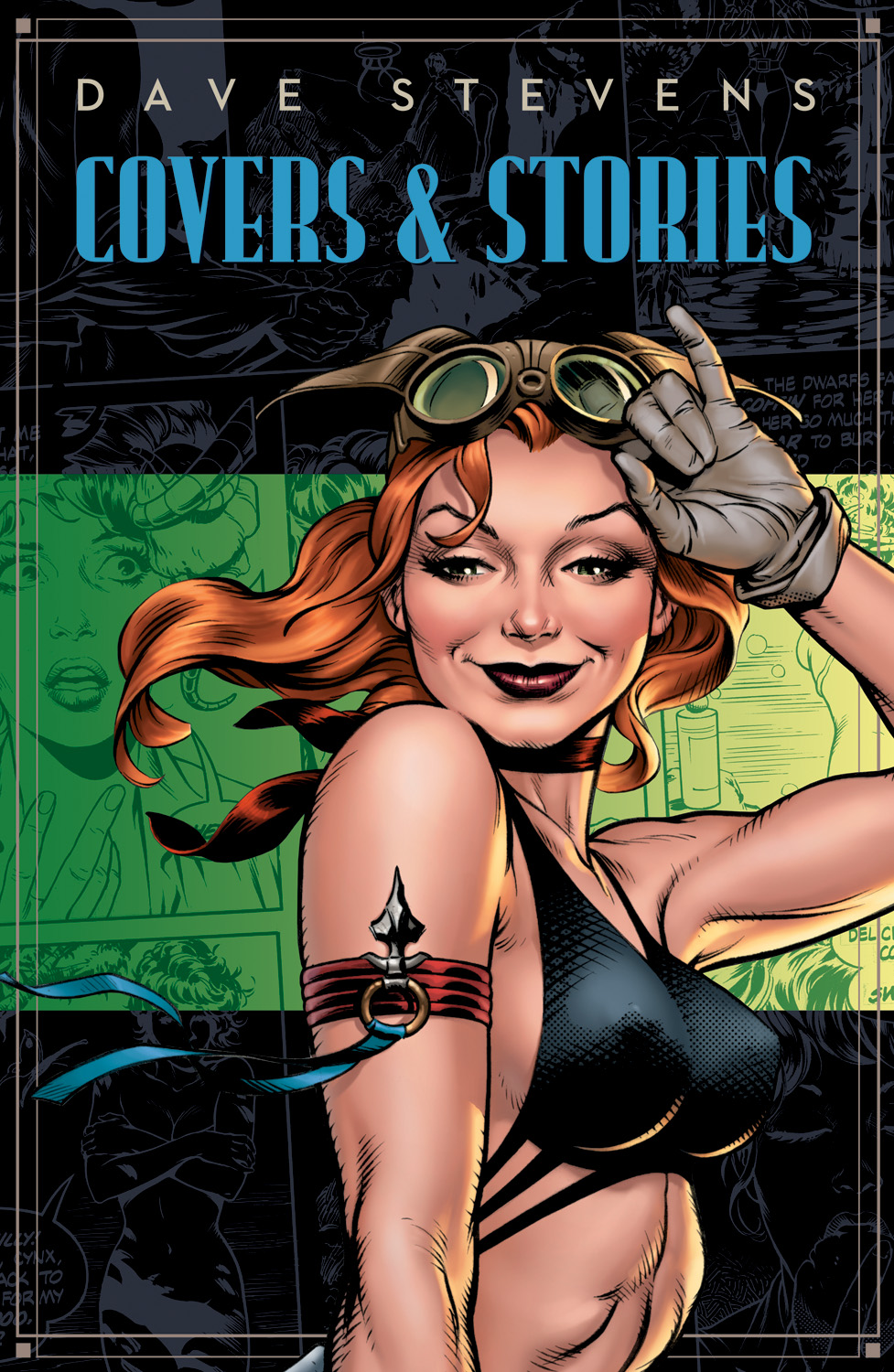 As Talking Comics habitués know, I’m an avid fan of the work of Dave Stevens, ever since my first encounter with The Rocketeer in the pages of Eclipse Comics’ book of the same name that collected the previous chapters from Pacific Comics’ Starslayer, along with a newly-created finale. It was plain to see in every panel that although Mr. Stevens’ influences were clearly evident (Wally Wood, Reed Crandall, Lou Fine, Russ Manning), his amalgam of their styles was something unique.

For those of us who fell under the spell of his pencils, it became a maddening scurry to find all the pieces that Mr. Stevens worked on; covers for myriad companies and bits scattered all across the comics landscape. Now, IDW has simplified matters with an absolutely stunning new book, Dave Stevens: Covers & Stories, which was released on 25 September.

As compiled by David Mandel and Kelvin Mao from a number of industry sources and private collections, here under a gorgeous cover of pure Dave Stevens “good-girl” art is assembled his non-Rocketeer oeuvre, featuring works from DC, Marvel and virtually every independent, and reproducing nearly every cover (and in many cases, the rough sketches that preceded them!), samples of his work assisting Russ Manning on his Tarzan strip, his inks over the pencils of Howard Chaykin and Al Williamson on Marvel’s Star Wars, as well as pin-ups, product designs, unfinished stories and sadly, the few published complete tales from this very talented creator.

Interestingly, as you leaf through this spectacular book, and gaze in wonderment at page after page of amazing artwork, you’ll come to realize that despite the “Alberto Vargas/George Petty pin-up” style that Mr. Stevens employed, the stunning detail work, playful poses and charming facial expressions on even the most “adult artwork” (yes, little Audrey, there is some nudity here, so avert your eyes when I ask, please!) never seems as lewd or pandering to prurient interests as what appears on the covers of comics today.

(SIDEBAR: There is a  Comics Journal cover contained here-in, a winking self-portrait of the artist drawing an exotically-clothed “dancer”, whilst griping to an un-seen editor “Whatta’ya mean pandering?!! We’re talkin’ High Art here!”)

VERDICT: …and High Art it is, too. There isn’t much for me to say past what I’ve written previously here at Talking Comics (see “Remembering The Real Rocketeer: Appreciating Dave Stevens”), and if as they say, “A picture is worth a thousand words”,  this collection of astounding artwork is a dictionary’s worth of riches for any fan of comic art!  This book is highly recommended, and even at $50, a right bargain.

ADDENDUM: There is a lovely, heart-felt introduction by the very talented Adam Hughes, in which he displays his admiration for both the art and the artist, and his stylistic debt to Dave Stevens.

Brush with Passion: The Life & Art of Dave Stevens (Underwood)

(Since I love what Steve Seigh does so much, naming his “soundtrack”, I will do the same, so if you (and Steve!) don’t mind over-much…)

This review was written whilst drinking a fine glass of Malbec, and listening to an album whose theme encapsulates the richness of Mr. Stevens’ work, the 1970 album Still Waters Run Deep by the Four Tops, which was the first Motown “concept” album, pre-dating Marvin Gaye’s “What’s Going On?”, whose title track was co-written by Obie Benson of the Four Tops!