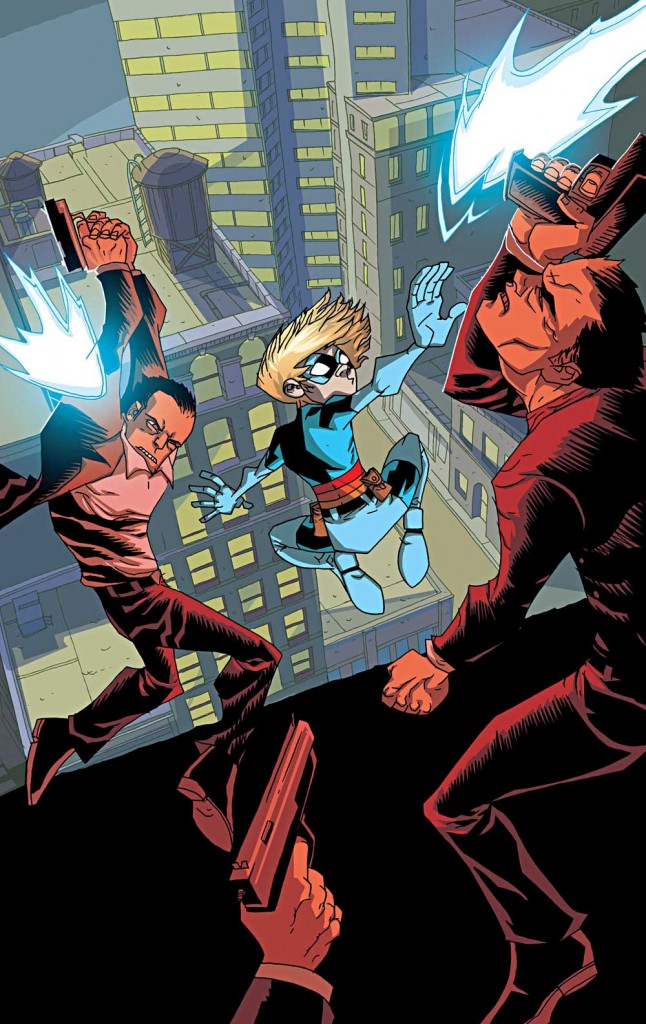 Rarely do I ever find a great comic book that is kid appropriate. I was a huge fan of Tiny Titans, and even some Superhero Squad books are good; however I have to wade through a lot of silliness to get to an all-ages comic book that is enjoyable for a wide audience, even kids. Enter Takio.

Takio, created by Bendis, Oeming, and Bendis’s daughter Olivia, is the story of two sisters, Taki and Olivia, who are in a lab accident and receive super powers. Taki’s friend, Kelly Sue, was also in the lab accident, holds a grudge against her old friends. The sisters decided to try their hand at being superheroes, and Kelly Sue slowly becomes more and more withdrawn.

That’s all the history you need to know to jump into this third issue.

Bendis and Oeming keep the plot relatively simple in this issue. Kelly Sue’s father, who was responsible for the accident, is under a lot of pressure to recreate the situation the girls went through so that more people can have super powers. When his experiment fails, he must bring in the other girls to take samples and run experiments. Kelly Sue tricks Taki into following her to her father’s hiding place. Taki, who is still getting used to her powers, is vulnerable and easily overwhelmed by her own power. That’s not to say she should be taken lightly; Taki delivers a pretty strong “Kung Fu Telekinesis” when threatened. The ensuing battles pits two young girls with new powers against each other as they test and push each other.

The third issue in this delightful series also looks into the relationship Kelly Sue and Taki had growing up. Their friendship is told surrounded by pages of betrayal and brawling, making the exchanges they have while fighting even more hurtful.

While Taki is the main sister featured in this issue, Olivia has her fair share of reader attention. Being the little sister that she is, she snoops around Taki’s room looking for clues to her recent disappearance, eventually using her powers to open the lock on Taki’s diary and discover her whereabouts.

It’s a good buy, and one that I can safely recommend to any reader. The plot isn’t too complicated for young readers, and the characters are relatable to older readers as well. It’s a fantastic all-ages read, and, at issue #3, a great place to jump in early on the series.