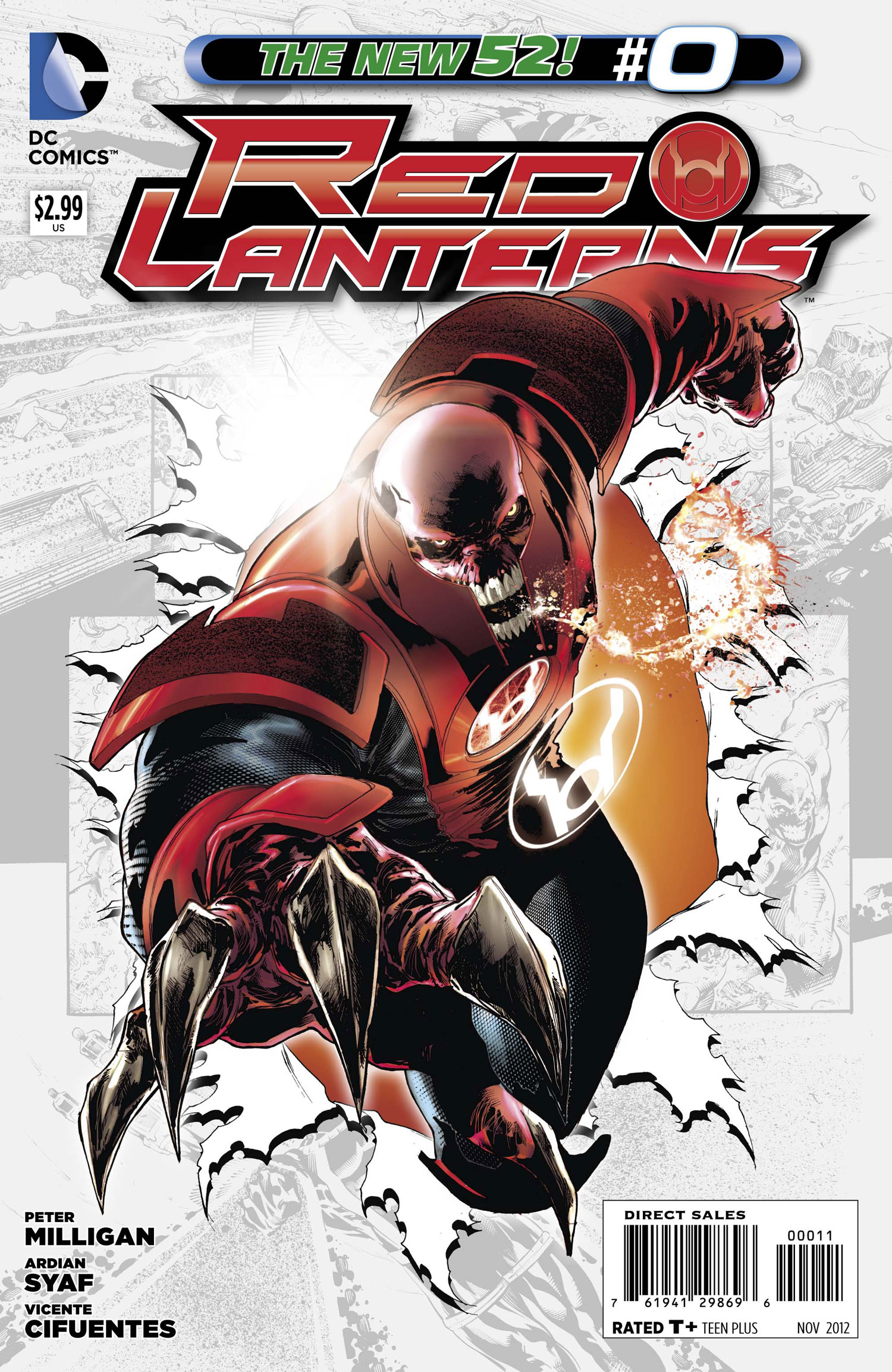 It’s no secret to anybody who knows me that I am a huge fan of Peter Milligan’s Red Lanterns. While it certainly had a rocky start trying to find its footing in the newly established DCU, it eventually found its voice and became a solid, thoroughly enjoyable book. With the decaying power battery finally under control and the current storyline involving Atrocitus all wrapped up, September proved to be a perfect month for Milligan to go back and show the origin of the man who would become Atrocitus, leader of the Red Lanterns.

Atrocitus was formerly Atros, a kind family man living on Ryutt with his wife and two daughters. Trakka, Atros’s youngest notices that something is amiss with the Manhunters stationed there but he just takes it as a child’s imagination running wild. Little does he realize how right she was when the next day the Manhunters, under the order of the Guardians, go berserk and kill everyone except Atros, who kills the Manhunters himself.

Shortly after the destruction of the planet, four demons appear and convince Atros to join up with them in their quest to destroy the Manhunters and the Guardians that control them. Known as the Five Inversions, they destroy everything in their path which makes Atros stronger and stronger by the day. Eventually bonding with the aliens he becomes all powerful and changes his name to Atrocitus and the rest is history.

While most of the story in Red Lanterns #0 could have been told in two paragraphs on any comic database, as well as having already been explained, albeit in parts, throughout the previous twelve issues, Milligan does a solid job making us care about the man formerly known as Atros. The beginning parts on Ryutt are quite sad and paint Atrocitus as an almost sympathetic character, a man driven over the edge by grief who turns to violence to hide his suffering. It’s familiar, yes, but still written well and never feels too heavy handed.

The art this issue is handled by Adrian Syaf, former artist on Batgirl, and he does an excellent job maintaining the general aesthetic of the series. Red Lanterns has a unique style and despite a rotating group of artists, it feels cohesive and if you were to put it side by side with the rest of the series it would look relatively uniform. That’s not to say Syaf’s work doesn’t take any chances or do anything noteworthy, quite the opposite actually. The destruction of Ryutt is superbly drawn, from the first panel of the comic to when the dust clears, it’s all quite breathtaking. The four demons are also quite unique in their look and I’d love to see more of them drawn in the future, especially if Syaf is doing it.

If you need to have a visual reference on how the destruction of Ryutt went down and how Atrocitus came to be, then by all means pick this book up. If you’re looking for a major shake-up to his already established canon or something completely different, chances are you’ll be disappointed. Syaf’s artwork works well with the rest of the series but definitely has it’s stand out moments. Milligan writes a familiar, yet solid story and fans of the series won’t be disappointed. I’d say it’s worth taking a look at if nothing else.