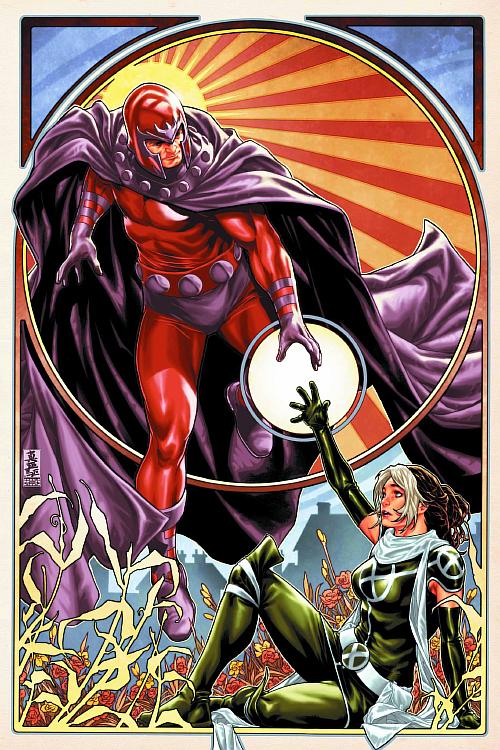 This is the Rogue story I was waiting for, one where she takes an active role in her world to save someone’s life. After months of reading about alien warfare, it was refreshing to see Rogue in her element, helping citizens recover from the devastation of the recent Phoenix encounter. Though she knows she may not have the power to take on Scott in his Dark Phoenix form, she is acting like a true hero.

But that’s enough Rogue worship. Let’s take a look at the story.

Absorbing the rescue workers’ knowledge, Rogue bravely volunteers to search rubble for survivors. Showing up in the knick of time to accompany her is Magneto in all his splendor. If there is anything we know about Magneto, it is that he doesn’t do anything out of the kindness of his heart. He has ulterior motives; namely, asking Rogue to, more or less, take a more active role in his life.

It’s natural to reflect on your life when facing death (which nearly every character has done, thanks to AvX), to think about the choices you made and the people you cherish. Magneto realizes that Rogue is the woman he wants to be his companion. She leaves his request unanswered as they come across survivors, one of which is Richard. Richard is a man in his 40s, a man full of regrets and a body full of shrapnel. From his career to his very core being, he is questioning his life, what matters most and what could have been.

It’s hard to see what Rogue sees at this moment. She had just heard Magneto’s plea to stay with him, saved several subway passengers, and a dying man’s last thoughts. I don’t know if Richard’s shock-induced clarity gets to her, but Rogue seems to want to save his life at all costs. This is when Rogue is most real to me, when she keeps her words tight and close to the chest, yet you can tell she cares more than any other character in the X-Men universe. She puts up a tough “leave no man behind” exterior, but I like to think she emotionally cannot afford for this man to die. This stranger who shares so much with Rogue, who has a history that Rogue relates to, is slowly dying before her eyes. She needs him to live, if only to prove to her that everyone can pull through the mess the two have in common.

The story is short, practically ending before you know it. The events in the rubble shape Rogue’s answer to Magneto, and it is one made with much contemplation and reservation. Rogue’s reasoning further supports my deep love for the character, and I have a feeling you’ll feel the same way.

This issue is a good read. While I wouldn’t encourage people who haven’t read ANY X-Men to buy it, if you are familiar with the history behind Magneto and Rogue (or not, it still reads well), I would encourage you to read it. You don’t have to read any AvX or previous X-Men Legacy issues, although it doesn’t hurt. It really is a great Rogue story.