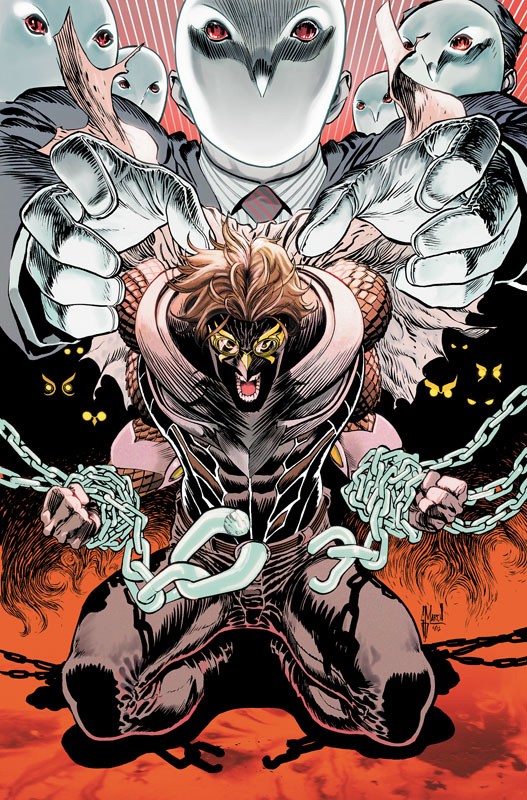 From the imagination and pages of Scott Snyder and Greg Capullo’s Batman comic of the DC New 52 comes Talon #0. Written primarily by James Tynion IV with creative input from Scott Snyder himself, Tynion is giving us a layered and intriguing character to add to the Batverse. Talon #0 is a comic that will immediately gel with already established fans of the Court/Night of the Owls Batman event and even manages to usher in new readers by being an honest and true beginning to something dark and sinister.

I’m pretty well convinced that Scott Snyder and James Tynion IV share some sort of telepathic link with one another. I say this because Tynion IV’s writing style is more or less a mirror for Snyder’s talented wit and way with words. Though, this isn’t to say that Tynion IV is just some sort of Snyder knock-off. His words are more like a most gracious compliment to all of the ground work laid down by Snyder and Capullo’s established mythos. The book’s title character, Calvin Rose, as I’d mentioned earlier is a character that within one issue has already been established as one that is complicated to pin down, making him one of the most interesting new characters to come out of the DC New 52 #0 issue roster.

I could be wrong, but I don’t remember a character more memorable than Calvin being added to the Batverse in quite some time. We’ve had a few new villains throughout the series, and anyone with their eyes glued to the internet knows that soon The Joker will be making his triumphant, though mutilated return. But because of the hard work dedicated to the crafting of Gotham’s latest and most diabolical threat, The Court of Owls, we now have an army of worthy foes for the Bat and his constituents to battle.

The dread of Crime Alley will spread throughout Gotham like a corrupt fog and the owls will ascend from above to punish the wicked.  The Owls will sharpen their claws and polish their beaks, the whole time with a thirst for blood that only the guilty of Gotham will sate. Calvin Rose is better trained, more compassionate, and the most likely to be able to bring his treacherous family down from the inside. As a fan of Batman and now Talon, I can’t wait to see how this all plays out in the coming issues.

I think that things inside of Gotham just got a lot more interesting with the addition of Talon #0 to the Batverse. The book feels like something that’s already established in the Batman series and is more than a compliment to the efforts of the series’ writers and artist over the past year. If you’re at all a Batman fan, or perhaps just want a great new anti-hero to latch onto than Talon #0 is your book.

* This review was written while listening to the album Amputecture by the band The Mars Volta.