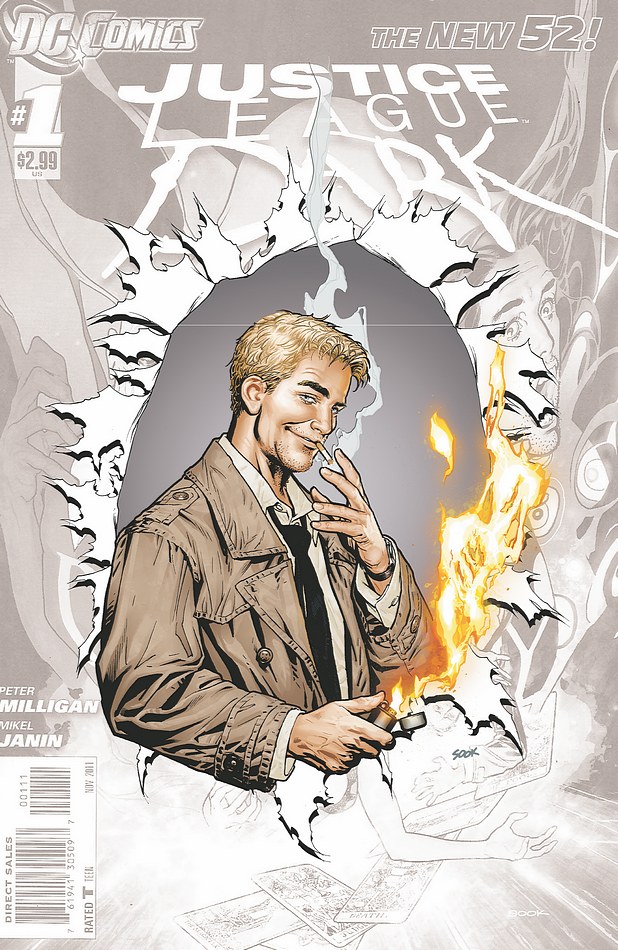 I must admit I’ve been lost for most of this series. Don’t get me wrong—I’ve enjoyed it immensely, and that’s why I keep buying it. Sure, some of the characters are unfamiliar to me, as well as the history, and significance of events that have shown up since the beginning of the series can get over my head pretty quickly. But the writing keeps me coming back for more.

Lemire takes us way back to Constantine’s arrival in the States. He seeks more power beyond the rudimentary magic that he learned in Newcastle. The magic mecca? New York City, of all places. Constantine finds himself in the apprenticeship of Nick Necro, the greatest mage in the City. Nick’s got something else besides magic that Constantine wants: Zatanna, the stunning “backwards-talking goth princess” is Nick’s girlfriend. The three of them cultivate their powers in New York’s underground, battling the Cult of the Cold Flame and other magic threats.

Not surprisingly, the three become close. Nick tattoos Zatanna and Constantine with his rune, binding the three together as a coven. Nick’s obsession with magic takes him down dark paths, including researching and lusting after the Books of Magic – the same books Constantine is after in the main arc. This issue gives us a glimpse at the history Constantine shares with the books, making them even more enticing to us as the reader. I for one can’t wait for the moment Constantine gets his hands on them.

Great jumping-on point for the series. From what I can tell, it pretty much explains everything you need to know to start reading on issue 13. Plus, it has one of my favorite pages in the series: the moment Constantine sees Zatanna for the first time.